Everything's Up to Date in...

C'mon, now, y'all know the song.  I presume.  Maybe it's only folks here in Okielahoma who can sing almost every song from the Rodgers & Hammerstein classic.

Anyway, the end of the line is "Kansas City."

Our family had needed a little getaway for a while, and Oz finally decided we'd take the kids there.  Besides anything else, the kids were desperate to go to the Great Wolf Lodge since they'd been to the one in Dallas; they wanted to see how different the two were. (Answer: The layout is very different, and if you are a fan of the MagiQuest, I suggest KC, but if you're a fan of the water park, go to Dallas.)  So we drove up on a Thursday morning and spent the afternoon and evening letting the kids swim and play MagiQuest to their heart's content.  The best part was that Oz got M1 to go down a water slide (a first!!!) by bribing him with dessert.

Hey, whatever it takes.

The next morning we had arranged for a late checkout, so we went swimming again, washed up, and headed out.  After a quick lunch, we drove over to Crown Center.  We parked, walked into the mall, and I discovered an entire store full of cat stuff.  I didn't go too crazy, promise, especially since the real reason we'd driven to the Center was to go to the aquarium.  But we had to window shop, especially when we saw the store where they had fresh fudge cooling on the counter.  That mall is an easy place to lose yourself... and a hundred dollars (did I mention they also had a kitchen gadget store?  I'm now the proud owner of 12 silicone cupcake liners, which are perfect for making egg muffins).

The aquarium was the perfect place to kill an afternoon.  It was very kid-friendly, and the kids spent about 20 minutes in one room alone, just watching the fish and rays swim 'round and 'round in their tank.  After that, the kids were toast, so we checked into the hotel and ordered pizza delivery.  I think that everyone but me was asleep by 9:30.  Night owl that I am, I read till 11:30 or so. 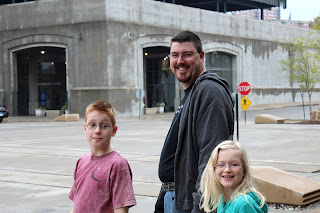 Our last day in town - Saturday - was when I finally had the chance to break out the camera. 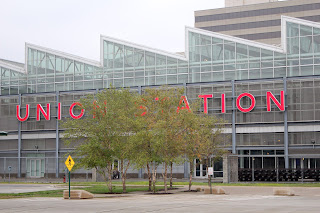 That'd be a "Union Station" sign behind those trees there. 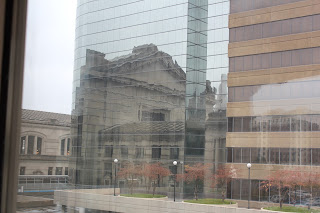 Here's an actual shot of Union Station... well, OK, an actual reflective shot off a glass-front building nearby.  It was rainy while we were in town, so I didn't want to stand in front of the building and get my purdy camera soaked.  So I shot this picture from the walkway between Union Station and Crown Center. 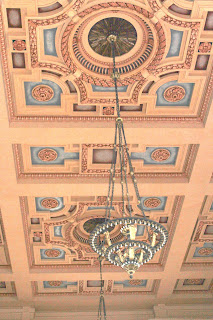 The ceilings are high and gorgeous... 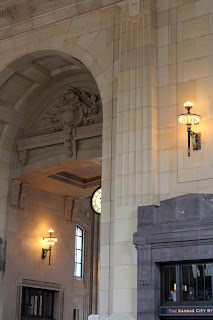 ... and there's marble everywhere you look.  There were actually a couple of weddings taking place while we were there.

Inside Union Station, there are several places to visit.  There's a small model train museum, which has free entry with the purchase of entry anywhere else, there are restaurants, and most importantly to my kids... there's a science museum.

We had wanted to take them to the zoo, but... well... it was raining.  And it was supposed to storm.  And while I don't mind the rain, storms are another matter entirely.  So we stayed inside.

The museum opened at 9:30, and we got there shortly after; I think we left about 3:30 or 4, though we took a short break for lunch.  The museum was simply that captivating.  They had everything from math puzzles... 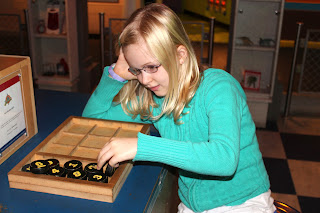 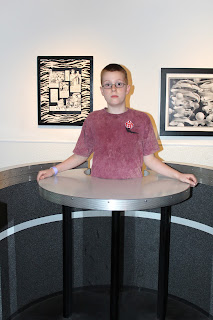 ... and everything in between.  They even had a couple of 3-D printers set up and running while we were there, and if you look on M1's shirt, you'll see a small red patch.  That's a small flashing pin that he got to solder himself.  The guy who was running the soldering activity also had the 3-D printers going, and he and M1 chatted for quite a while. 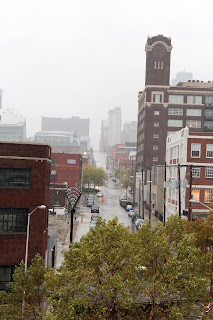 Even though it was a rainy, gray weekend, the trip was everything we had needed.  It was an escape from routine, a place not too far away or too odd, and it was just a neat place to visit. 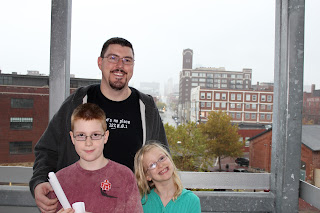 Oh, and did I mention the Crayola store?