The kids turned in their papers this week.  I thought they did well, and I may post those separately.  Or not.  I haven't decided yet.  For week 9, even though it's primarily an interest-led week, the kids will still be doing history and math and a couple other electives.  So I'll be back next weekend with yet another installment.

Tuesday:  We filled in the Phoenicia's Trading Empire map from Map Trek and they started typing up their papers.

Wednesday:  Videos!  We watched a bunch:  One on glassblowing (we also searched for Phoenician glass images so they could see some of the stuff the Phoenicians actually produced), one on the Phoenician Ship Expedition, and one on extracting dye.  There's another video out there, called Quest for the Phoenicians, that is available in parts on Youtube or for legitimate sale in the National Geographic Store, that we caught the preview for.  I may check it out another time, because both kids really, really like the Phoenician peoples.

Thursday:  Definitions (city-state, colony, obelisk, alphabet) and Doodlebug's critical thinking questions (What were some advantages and disadvantages of having cooperating city-states vs. a unified country?  Which of the Phoenician's inventions [alphabet, dye methods, glassblowing, shipbuilding, colonization, etc.] is the most significant to us today?  Why do you think that?)

Friday:  I was going to suggest that the kids help me make pita bread, but they had other (and better!) ideas.  Doodlebug decided he wanted me to find him a map of Mediterranean currents and winds so that he could work out different sailing routes that the Phoenicians would have used to get to their colonies. 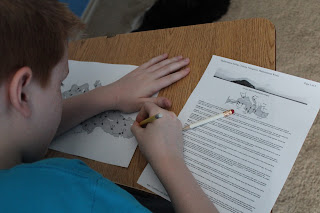 Boo decided she wanted to see if she could build her own boat. 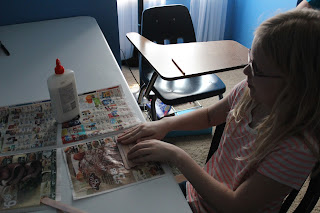 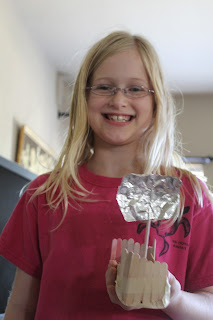 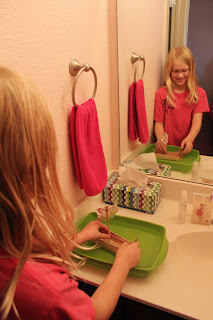 Both kids ran into different problems with their projects - Boo had originally wanted to make a curved boat and Doodlebug wanted to figure out one route that would work for all seasons - but they both overcame their frustrations and were happy with their final results... even if the boat didn't float for more than a few seconds before sinking catastrophically.

I love the independent projects, very creative! And I'm bookmarking all the video stuff for when we get there in SOTW.