Bakerella I am NOT!

I reiterate my title statement. What you are about to see is not pretty, perfect, or very Susie Homemaker-esque. But preschoolers (and the principal) liked it!

Here's my version of making Bakerella's gorgeous cake pops. She can do this SO much better than I can. I have an infinite amount of respect for her now. I had respect before, but now I bow before the Cake Pop Deity in actual reverence.

Start with cake. Chocolate cake in my instance. I used Pam to grease this, so the sides climbed, but meh. Why worry about that when all you're going to do is crumble the entire thing? That is a detail best worried about another day. 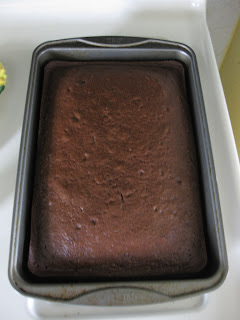 Crumble the entire thing and add an entire container of frosting. This takes FOREVER to mix in, because you have to make sure that all of it is mixed very, very well. I learned that even if you only have a few stray crumbs, they will come back to bite you in the butt later. Trust me on this. It's not pretty. 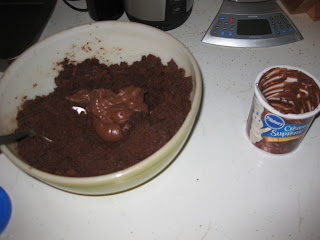 Then you form the cake/frosting mixture into a ball. This isn't pretty, either. This is what your hand will look like halfway through. I actually had to wash both of my hands before going to back to making more because the balls were sticking to my hands rather than each other. 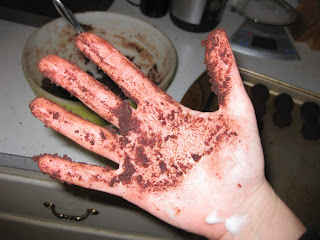 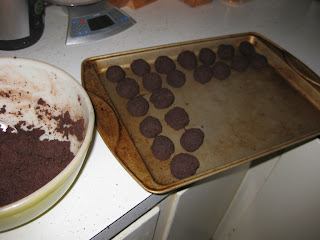 Once you get them all formed, stick them in the fridge or freezer till they're cold.
Then it's melting time! I used two colors of candy wafers today - white and pink - just for giggles and because my daughter likes pink but boys don't. I melted the white on the stove and the pink in the microwave, just to see which worked better. Microwave wins. Just do a 1-minute cook time at 50% power followed by 30-second intervals at 50% power, stirring in between. It should be melted in about 3 minutes' worth of cook time. 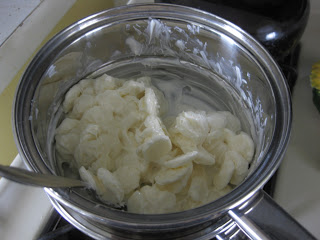 This is what the white ones looked like... I did them first. See how those crumbs show up? I warned you! 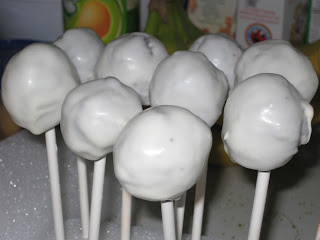 Then I got smart and took a picture of the process. Bakerella is 100% right about how to do this. She first of all recommends using a bowl with very high edges. I actually used a glass (as in, drinking glass that I usually fill with gin & tonic) for the white chocolate. Dip the stick in the chocolate before sticking it in the cake pop and let it set for a minute. Then thunk the thing down in the melted wafers and spoon the stuff over the top. Lift out, and TAP. TAP TAP TAP. It reminded me of that Simpson's episode where Lisa takes up tap dancing... "taaappa tappa tappa!"
Moving on.... tap some more. Some will fall apart. Keep a spoon handy to scoop them out. If you want to be like me, eat the casualties until you are nauseous. Once they start falling apart, though, put the rest back in the fridge until they're cold again, because apparently warm cake/icing falls apart much easier than cold cake/icing. Nothing like logic to ruin my snacking. 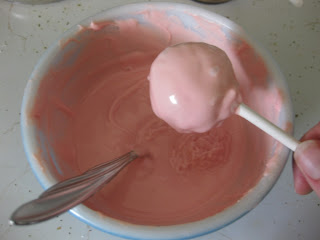 After a while, I wound up with THESE. 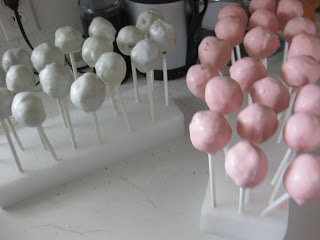