Being an aspiring gardener, I figure canning goes right into that equations. I tried my hand at making salsa today. I have canned before - I made blackberry jam last year - but salsa is actually a lot more involved than jam. Mostly... you have to chop. A lot.

I pulled a recipe out of the Ball Blue Book of Preserving which, according to many sources, is pretty much the ultimate in learning to can and preserve food. Zesty Salsa was the name of the recipe I used.

Here's a tip: If you ever make salsa, do the blanching on one day and make the salsa on another. You can stick the peeled tomatoes in a Ziploc bag in the fridge overnight. They'll be fine. Another note: Any remaining yellow on your tomatoes will not peel off. When the skin turns red, it apparently gets looser. You also don't want to use mushy tomatoes. They don't work.

Moving on. So I blanched and peeled the tomatoes yesterday and left them in the fridge overnight in the above-mentioned Ziploc bags.

Then I got all my stuff together. In canning, there's a lot of 'stuff.' 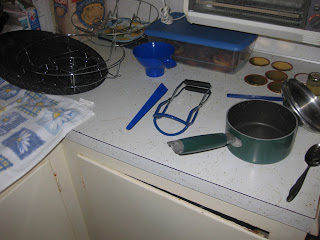 That's most of it. The jars and bands for the lids are in the dishwasher. You have to sanitize them first, and a quick way for me to do this is to set the dishwasher on 'sani wash' with 'speed dry.' When that's done, I know the jars are well and truly ready to be used. So while I was setting all this up, the jars were washing. 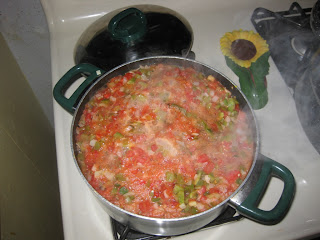 That's the salsa mix, bubbling on the stove. It had to simmer for 15 minutes before it was ready to can, though if it needs to go a bit longer, it won't hurt anything. Of course you can taste test it while it's simmering. Not that I'd do that. 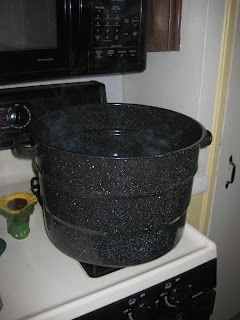 Don't forget to get your boiling water ready for canning! The water in this will take
F-O-R-E-V-E-R
to boil, so start it early. You can see it's steaming here while the salsa is simmering. It was almost ready by the time I was. 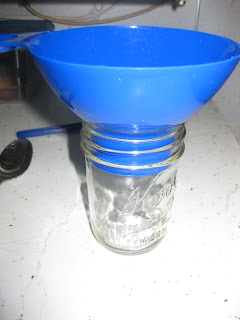 Once the jars were ready to fill, I put in the funnel and ladeled in the salsa. 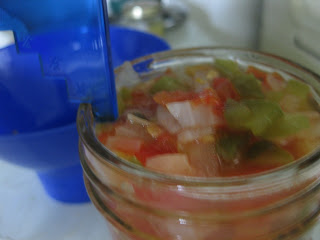 Once you get something ladeled in, you use this handy little tool. I used the other end of it first to get out any air bubbles in the jar and then flipped it over to use this end, which measures the thing they call "headspace." I was supposed to leave 1/4" of headspace to make the salsa. That means the end of the 1/4" mark on this stick should just touch the top of the salsa. Mission accomplished! Then you use a paper towel to wipe the rim of the jar so that you can get a good seal, and you're ready for these: 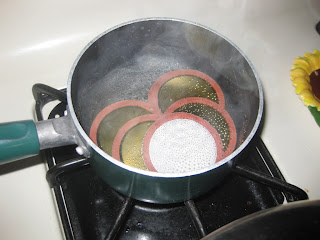 These are the lids, those things that actually do the little 'pop' when you take them off. You have to simmer - not boil, just simmer - those for 10 minutes before you use them, too (again with the timing issues), so that the sealing material is soft and ready to seal.

This is a magnet that I use to get the seals out of the simmering water. Very handy. Then you set that on and screw on a band. 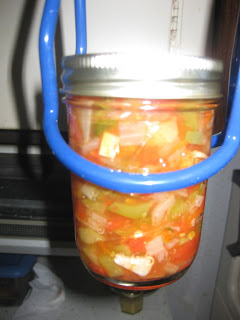 One can of salsa, all ready to be sealed! Repeat this six times and set them in the canner with the rack. This recipe boils for 15 minutes. Then you take out the jars and set them out to cool. 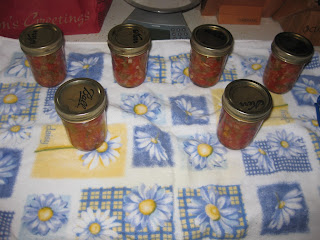 My first six jars of salsa! I wound up making 12 half-pints and still had some left over that's currently in my fridge to be used immediately.


It was a lot of fun, and I hope to be doing more canning in the near future. I'm headed to a peach festival this weekend and intend to get some fresh peaches to just HAVE to do something with. I'm thinking peach preserves, but ideas are always welcome!
Posted by S. at 7/15/2009 11:01:00 PM