For a month or so now, my boy has been excited. For Christmas, the Cubmaster of our pack gave each Cub Scout a pinecar derby kit. The boys had all of Christmas break plus a couple of weeks to make their cars.

M1 was in heaven. He sketched out an image of his perfect car (which Daddy shaped) and told us EXACTLY how he wanted it painted. Gold was crucial. 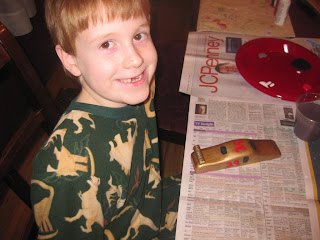 We got him some craft paint from the store, and he painted almost everything on this car - everything except the numbers on the side, which he politely asked me to help with. 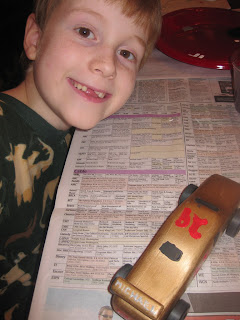 And then I put his name on the back. He was exceedingly proud of his work, and we were very proud of him, too. He had worked hard on it! 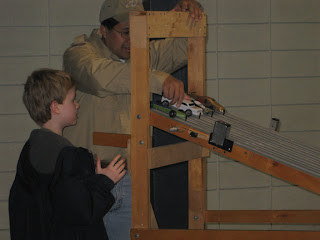 We went for a test run a week ago, and his car was one of the fastest. A lot of modifications can be made in a week, though, and the race itself didn't happen till today. 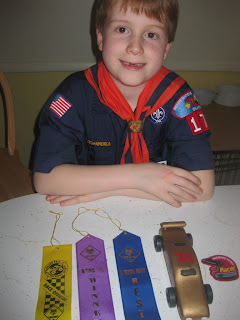 In the end, he didn't get a trophy, but he got a ribbon for participation, one for the "Most Genuine" car, and one for doing his best. He also got a patch for his uniform.

Big congratulations to him! :D

Congratulations, M1!!! You should be very proud of a job well done.

I still have my boys Pinewood Derby cars. My sons are in their thirties!