I got up yesterday morning painfully aware that our Christmas break is coming to an end.  Oz went back to work, and I realized that while I've really enjoyed our time off, the natives are getting restless and it's time to get back into our routine.  (I'd honestly enjoy getting back into the routine more if it was more staggered, and we didn't have everything starting back at the same time, but c'est la vie!)

While the kids were running through their morning routines, I asked them if they had anything they really wanted to do before the break was over expecting to hear that they wanted to go to the zoo or have a tea party or camp in the back yard/game room.  And M1 did say that he wished it was warmer so that he could enjoy more time outside.  M2's answer, though, surprised me.

"I want to make a mural!" she announced.

Well, all righty then.

I've had a roll of banner paper forever.  M1 and I used it to make an ongoing timeline for history, but there was plenty of paper left over, and it's been sitting in the school room closet unused for a while.  M2 had noticed it and decided it needed a bigger purpose in life.  She hauled it down, and we unrolled it and cut off a length of paper that she wanted.

"What sort of mural are you going to make?" I asked.

M2 was quite exasperated.  "YOU know, rangoli.  Like from the book that I get at the library a lot."

It's true.  M2 has checked out that book a few times now, and she really likes the story.  I can't say I'm surprised, since it's about a little girl who struggles with her art, but I'm glad she's been inspired.  We talked a little bit about what rangoli was, and M2 disappeared up to her room to work.  I snuck up behind her a few minutes later to check in... 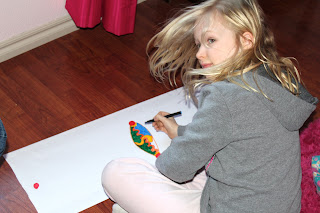 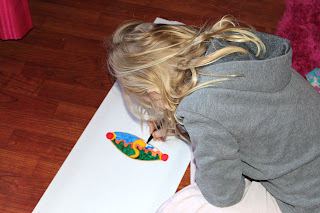 She was a busy little bee.  She stopped and started the process several times throughout the morning before coming to get me right before lunch.

"Want to take a picture of it?" she wanted to know.

Of course I did! 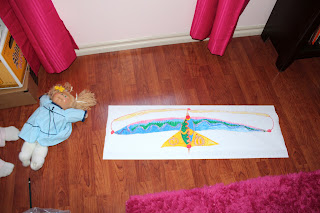 Love when books inspire them to do projects like this! And cool of you to let her enjoy it without having to explain it all.