Friday was a field trip day at our house.  The kids gripe that we never have/do field trips, which amuses me because apparently any time we go to a museum or the zoo or the aquarium, that doesn't count as a field trip unless it's on a school day, during school hours, AND I introduce some sort of weird educational component to the experience.

Whatever.  Friday was field trip day.

M2 wanted to try the generator: 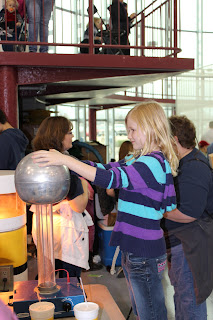 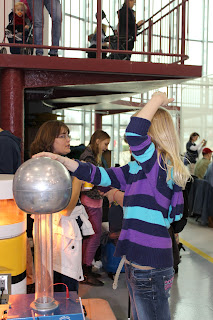 She giggled at the feeling of her hair floating above her head.  She didn't so much care for the boys behind her who kept touching her just to feel the shock. 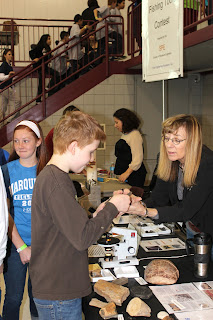 There was also a table discussing the geosciences featuring all sorts of fossils.  M1 got into a discussion with the woman there.

We watched rubber-band-powered cars roll down tracks, checked out the foil boat competition (open to the public; they give you a 12x12" piece of foil and you shape it into a boat, then fill it with as many pennies as you can before it sinks), and M1 watched folks using a virtual welding machine.  Overall, they had a good time, and - TAKE NOTE, LOCAL PEOPLE - M1 wants me to spearhead a team next year.  If you think your kiddo(s) of the right age would be interested, let me know.  I think it would be a lot of fun!

After we left the engineering fair, we grabbed some lunch and headed to the homeschool group that we've found.  We seem to mesh really well with this group, and today they had something special for us:  We got to 'test' a planned exhibit for a children's museum that's slated to open in late May. 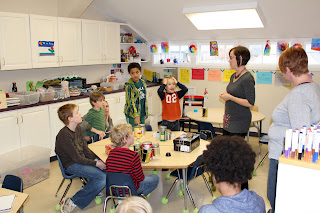 The woman from the museum explained the concept to the kids.  Basically, they want to have an area in the museum where kids can come and build things.  They'll change the building materials and plans regularly, but they were thinking of starting with musical instruments.  This woman had everything but the kitchen sink with her today, and the kids went to town. 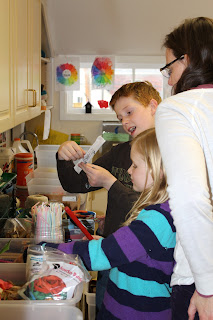 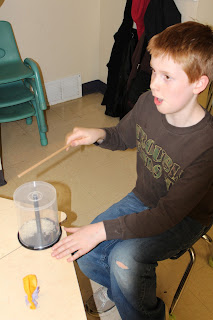 M1 made a snare drum as one of his instruments.  He made all sorts of stuff. 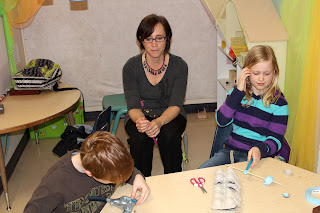 The woman wandered around and talked to all the kids about what they were building.  She wanted to hear the sounds everything made and took pictures of quite a few of their creations. 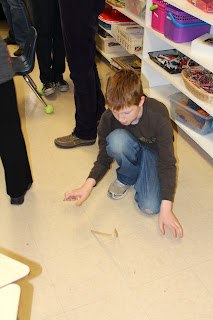 M1 didn't sit still.  He made probably half a dozen different 'instruments,' some of which worked better than others. 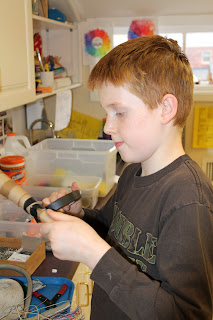 His horn was one of the 'failures.'  Not that it stopped him from hauling it around for 15 minutes trying to modify it to work. 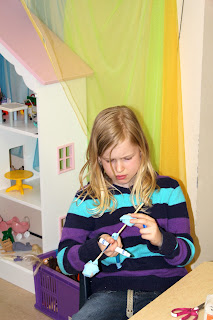 M2, on the other hand, sat down and worked on one instrument for the entire time.  It was some sort of shaker/rattle thing.  She was very frustrated and very proud of it at the same time.  I was amused that it had to be color-coordinated.  Hence the blue marker.

By the time we left the group event, the kids were worn out.  Both of them had headaches from the constant noise they'd been exposed to all day, and both of them were tired and ready to come home and crash.

What a cool museum! I wish we had something like that nearby.

Oh, how fun! Went to the children's museum in Portland, Oregon one time and it had a room like that - filled with all sorts of miscellaneous things that kids were supposed to build out of. I thought it was the best thing out of the whole museum.