The boy's birthday has come and gone, and he's been 8 for five days now.  He likes eight.  I think I'll be able to handle eight as long as the sarcasm doesn't get out of hand.  I can't really fault him for that one; I'm a tad sarcastic myself.  But there are times and places for everything.
He had a great birthday.  As always, it seems to get stretched out over a long period of time.  It started a week before his birthday when we went out and got him a desk and chair for his room.  He's already using the chair to spin in.  We moved a lamp from my room to his room since Oz and I hadn't used it for YEARS, and it matches well and provides plenty of light for him to see by.  I suspect long stints of building Legos and/or snap circuits and/or K'Nex are in his future. 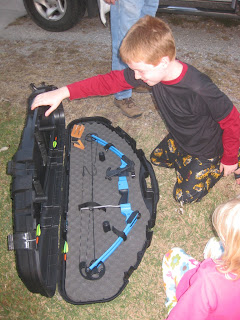 Then my dad dropped by the night before M1's birthday with this.  And a target.  And a promise of more arrows to follow. 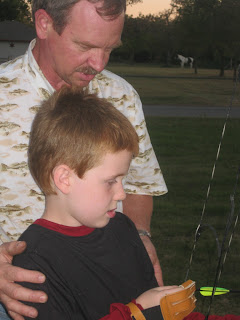 They spent a good amount of time working on the finer points of archery. 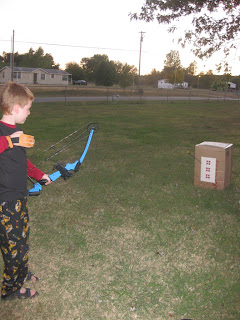 Both my dad and M1 were pleased as punch when he actually hit the target.  He's a pretty good little archer!  He promised my dad he'd go hunting with him someday.  I find this ironic considering that he's vegetarian right now, but who knows if it'll last.  Maybe, maybe not.  I'm not worried either way. 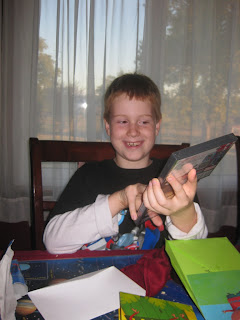 When he got up on the morning of his birthday, he got to open the other gift from Daddy and I.  I've had a Nintendo DS gathering dust in a basket for a year or two now, and I decided it was time to pass it on.  We got M1 a couple of new games to go with it, specifically MarioKart and Lego Indiana Jones, and he was thrilled.  Of course, he's already lost the DS due to sneaking it when I had asked him to put it away for a while, but I'm trying to impress upon him that if he's going to own these electronic devices he so dearly desires, he's going to have to learn to be responsible with them and monitor his own behavior.  Wish us all luck on that one! 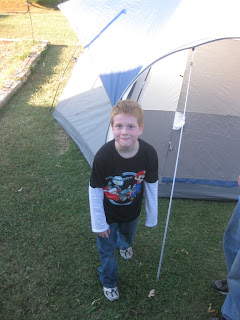 Later that day, we set up the tent in the back yard. 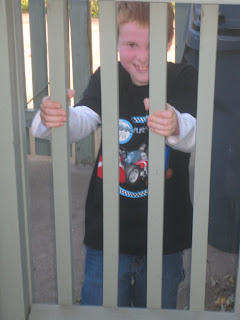 M1 pretended he was imprisoned behind the doors of the porch so he wouldn't have to help too much... 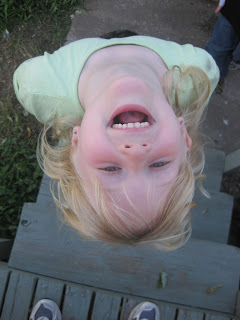 ... and M2 flipped her Diva switch to 'on' and worked that magic the way only she can. 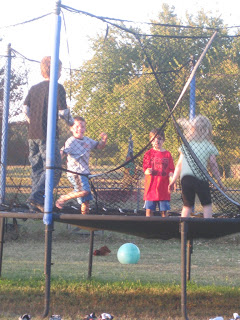 Then M1's friends J and F showed up (they're identical twins), and they all ran around like crazy while their foil packets of vegetables and cube steak (well, except for M1) grilled.  The smell was heavenly. 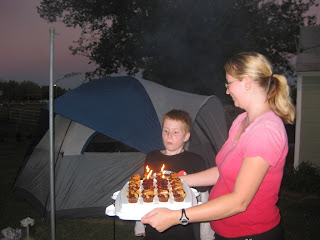 M1 officially turned 8 by blowing out the candles on his mini-cupcakes. 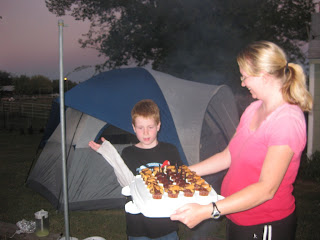 He got his wish, too. 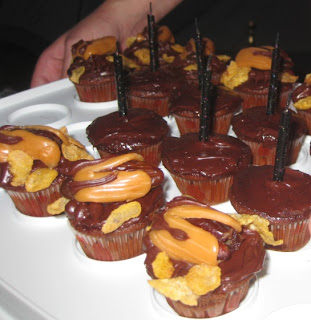 Roach cupcakes.  Mmmmmm..... and of course I let the kids eat as many of them as they could stuff into their mouths, because that's what birthday parties and sleepovers are all about, right?? 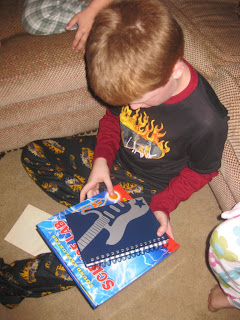 We came inside, changed into pajamas, and M1 opened the presents from his friends.  He got a journal and a pop-up science book.  He really loved them both, and they both now reside in a space in his desk that he has reserved for such things. 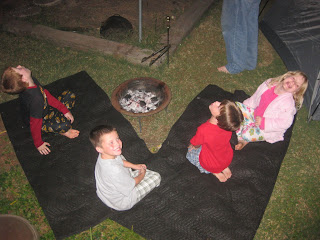 They watched part of Iron Man 2 before taking a break to go roast marshmallows over the remains of the fire.  I have to give my husband TONS of kudos for this birthday.  He set up the tent, watched the kids while the twins' mom and I made the packets and chatted, did the marshmallow roasting with them, supervised most of the movie, and was just a ton of help all around.  It's the first time he's really participated that actively in a birthday party before, and the kids ate it with a spoon... and so did I.

After the movie ended, us moms decided it was time to call it a night.  The boys all piled into the tent and M2 claimed M1's bed for the night since it's bigger and she wanted me to sleep with her as a special treat away from the boys.  The boys were still awake at midnight and were up before 8 a.m. and were tired as all heck the next morning, but I think they all had fun.

That sounds GREAT, just really great!! Glad to see it all worked out!