It all started innocently enough. M1 declared that he was vegetarian again the second Oz was out of town, and since I hadn't made a meat-filled menu or a grocery list or gone shopping, I shrugged and said fine.

Then I asked M1 if he wanted me to make some pea pottage at some point during the week. Pea pottage is a recipe I got out of a medieval cookbook of modern publishing, and I make it once or twice each fall/winter. There are always tons of leftovers, but with a vegetarian boy back in the house, I don't see that being a bad thing. 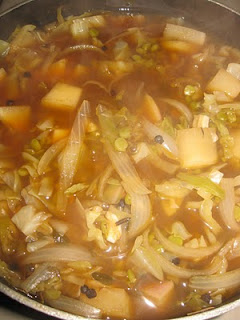 Anyway, there's the pottage. Basically it's dried peas that have been soaked overnight, rinsed, and then simmered. You also add other vegetables (onion, cabbage, and in this case, turnip) that might have been available during the period. Because I'm wealthy by medieval standards, I added peppercorns, but I also added some salt, rosemary, bay leaves, and marjoram. The recipe also calls for some salt pork or bacon, but obviously I couldn't do that and have the boy eat it.

Then M1 and I read about the Vikings. He likes Vikings. He loves their myths and their weaponry. He has read Beowulf and adores it. Now that he knows that they became Normans in Normandy, he can't wait to read what happens next. We learn about the Battle of Hastings next week.

Anyway, there was a recipe for 'Viking bread' in the activity book. I had the soup simmering on the stove and we had to go to the grocery store anyway, so I asked M1 if he wanted to pick up some stuff to make an impromptu Viking 'feast' for dinner. 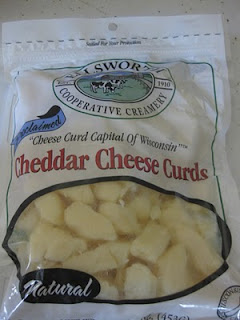 We found some cheese curds and bought those. They're probably not entirely authentic, but they're delicious.

When it came time to make the bread, I looked at the recipe. It called for some white flour and some whole wheat flour, but the note above the recipe said that true Viking bread would have been made out of oat, barley, or rye flour and that they would have ground the flour by hand.

Somewhere in the recesses of my brain, a light went on. I told M1 to hang on and dug these out of the pantry: 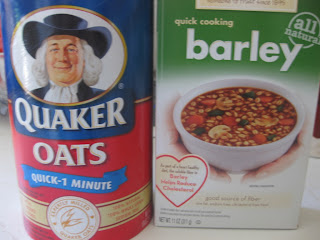 Then I said, "You wanna make our own flour and have it be REAL Viking bread?"

I'm all about stupid questions. 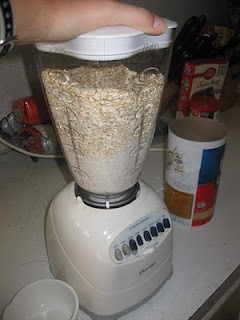 The blender made the flour nice and coarse. Some of it was very finely ground. Some of the pieces were still almost whole. Then there was every nature of granulation in between. 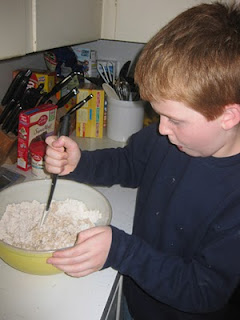 It made a very stiff dough... 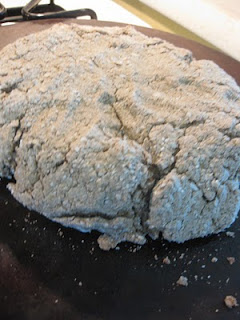 ... and a very stiff bread. The outside was almost like a shell. The center was soft but coarse and very dense. It was delicious, though. M1, who has long had a fascination with medieval cooking, really loved it. It soaked up the pottage beautifully. I had - and shared with the children - the thought that if this bread dried out, it would almost be as hard as stone and could easily have been shaped into a trencher for eating.

And so we ate and drank water (I should have had a beer!) and talked about those good ol' Norsemen who went i viking. Here's to them!

What a cool idea! And yummy too!

Aye, here's to the Vikings! They were a tough lot. Can you imagine growing up, never having seen a butterfly? No wonder they moved down into the British Isles.

Has M1 read "Vicious Vikings" from the Horrible Histories? The Boy loves it, and we're still working on ancient Greeks.