Night of the Cat

One should never, ever let me become bored on a Friday night. Especially when there's a camera available.

OK, so there wasn't originally a camera available, but gravity had taken hold, which cause me to slither off the couch and loll on the floor like a drunken monkey (but I wasn't even drinking) and start to giggle at cats, and then I ordered Oz to retrieve the camera from the utility room where it was resting, and when I'm like that, it's hard to deny me. It's hard to deny insanity its right to take over the world, one photograph at a time. 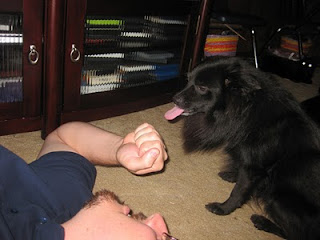 It was one of those nights. The type of night where it looks like you're trying to fist-bump the dog except he's not cooperating and is giving you the tongue, which is the dog equivalent of the finger. I can hear Oz now: "Dude, not cool! Don't leave me hangin'!"

Except that what Oz was actually saying was, "Don't lick me, you filthy creature!" 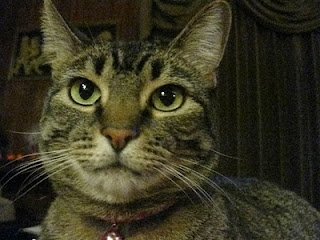 It was one of those nights where you take a picture holding the camera upside down while you're underneath the table where the cat is sitting and it turns out better than anything you could have possibly taken while sitting upright and TRYING to take a good picture. 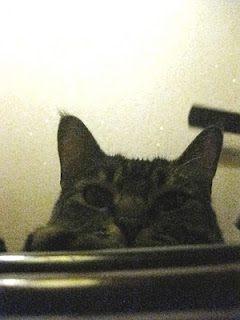 Then, of course, I had to crank up the ISO to make the pictures nice and grainy, but it helped me capture THIS gem. Even the cat is having a total WTF moment, trying to figure out what on earth has possessed the MomCat. It didn't help that I was giggling at her flattened fur lying against the glass on the coffee table and tapping the glass to see what kind of reaction I'd get. I'm sure that didn't bug her AT ALL.

I'm kind of annoying like that. Are we worried about my mental status yet? You should be. I am. 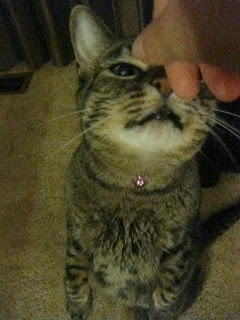 Tempest did oblige me by meerkatting on her hind legs so I could give her a scratch. She'd sell her soul for a good ear-scratchin'. Much like I'd sell mine for beef stroganoff and Halloween decorations.

It's all what you're into, I guess. 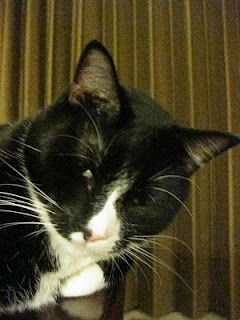 Dorian Gray is just wondering what the bejeezus is going on here. He's easily confused. It comes with lacking a few brain cells. Love him, but he hit the 'Nip pretty hard in his youth, and it shows. 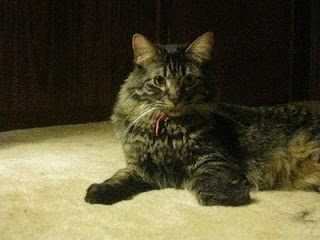 Vixen saw the camera and tried to do her best Abercrombie & Fitch modeling pose. She's the epitome of apathy for the sake of fashion. The only thing keeping her off the feline runway is her tail. Her tail is its own entity and sometimes reaches around and whaps her in the nose, just for the sake of reminding her it's there. Then she feels the need to bite it, which hurts, so then she licks it, and then she dashes off across the house with her little genie kitty feet. She's such a priss. I'd say she also lacks brain cells, except that she's a very bright cat. She's just blond underneath all that fur. As a blond myself, I can say that. She and I get along nicely. It's why I can make fun of her Entity Tail. 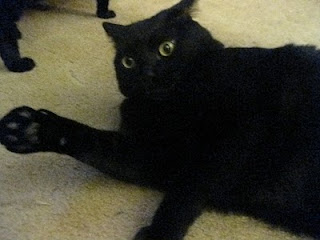 Kuro? Well, Kuro was in the same mood *I* was, I think. I can hear him wondering, "Dude. My brain's messed up. I think I need to mess with someone."

He also likes the 'Nip. Dorian introduced him to it. He's such a bad influence. 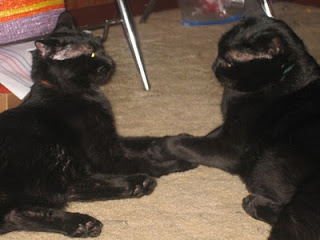 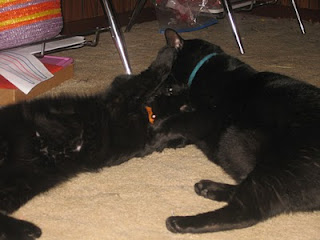 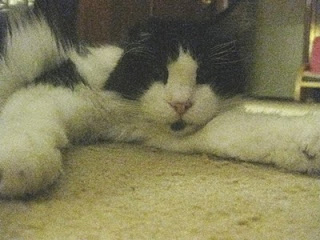 And Pepe watches it all, with the most unconcerned look on his face, one that only an 18-year-old cat with a scarred ear can muster. He just wants to know what's the point of it all.

There is no point, my good kittyboy... no point at all.

Good Lord, you've got quite a herd there! And they're all brain damaged, like mine. ;)