So robotics camp is officially over.  I wish I could show you the videos of M1's robot at work, but I'm a technological genius and recorded them "sideways," and I don't know how to fix them.  If they ever get fixed, I'll share them, but for now they are hidden in the Oopsie vault.

Anyway, I did get a few still shots: 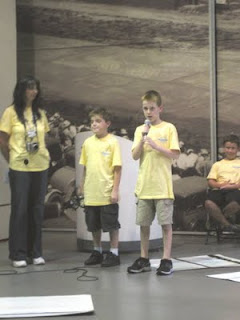 The kids had a demonstration period on Friday afternoon where parents and friends could come watch them show off their accomplishments.  This is M1 and his partner, J.  They got to introduce themselves and put their machines through their paces.  Their programs/robot did pretty well... not as good as some of the others, but for (what I assume are) a couple of first-timers, their robot more or less performed as expected.  I was proud. 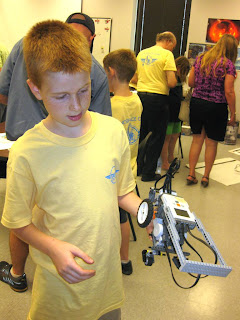 Then we got to go back to the classroom for dis-assembly and M1 got to show off his and J's creation a little more. 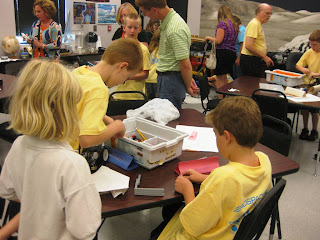 They had to put everything back into its place before they could leave.  Each kid got a certificate, and they were fed pizza for lunch that day, so it was a great end to a great week.

The down side?  It's over.  M1 is okay with that, though.  He was ready for his schedule to be back to normal.  Speaking of schedules, in the next post I'll talk about our setup for third grade.  It's only taken me till year 3 to figure out how to make it all move smoothly for one child; I can't imagine how those of you with two or more keep it all straight!
Posted by Sarah at 8/22/2011 08:30:00 PM