So I have been *told* that there are folks out there who are missing Chicky Cam. Since we moved the chicks out to the outdoor coop, which isn't wired, it's been offline. Oz is working on that. He got an indoor/outdoor camera and is trying to get it set up, but he wants to bury an electrical conduit out to the coop. It wouldn't just be for the camera, though. It'd also be used to run a heater in the winter. Since the horses also have a water trough heater that runs during the winter, the electrical thing has been needed for some time. We just haven't done it. 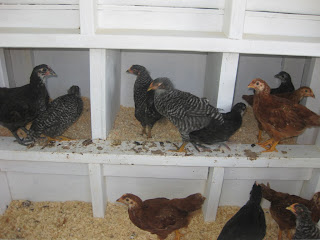 They're big girls now! They're about a month old, weigh between 2 and 3 pounds (some may weigh a little more), and are just the most well-behaved birds a new chicken person could ask for. They even let me catch them for the most part. 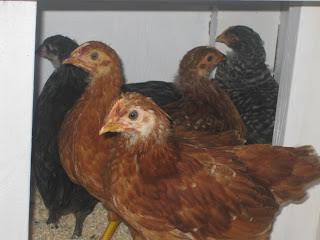 OK, so they're also a bit sassy. 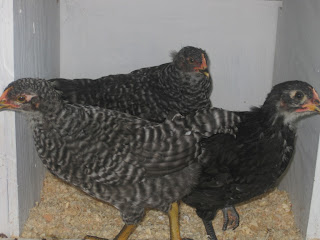 They'll eat out of your hand, though, so I can't object too much. 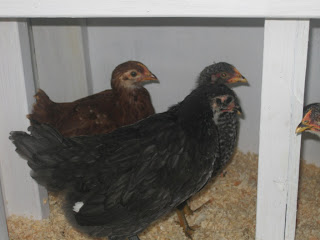 So long as they quit thinking my toes are edible.

The garden's not doing too badly, either. I've gotten probably five pounds of green beans out of it, four whole pieces of okra, half a dozen small yellow sweet peppers, and half a dozen bush tomatoes. And 9 pounds of cucumbers. Pickling time is getting close, and I picked the stuff up for that process today. I'm going to try to get myself down to Porter for peaches and make peach preserves and canned peaches the same day so that I don't have to overheat the house too often. Running the dishwasher, cooking the jam, and heating up and boiling the canning crock all day long takes a toll on the electric bill. The blackberries are almost in, too, so I'm hoping the tomatoes come in about the same time they do so I can do blackberry jam, canned tomatoes, and salsa simultaneously.

I might have a food preservation fetish. I still have frozen pumpkin from fall and last week's applesauce in my freezer. 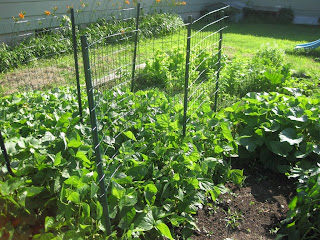 Anyway, here's a shot of most of the garden. 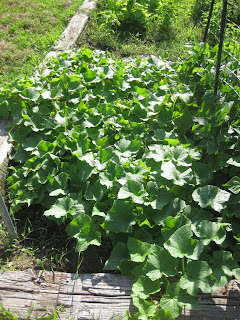 The cucumbers have taken over their corner and are threatening to spill into the grass. There are hundreds and hundreds of flowers in there. I may wind up with more than I bargained for in terms of cucumbers, which is fine cause I'll just sell the extras. One can only use so many jars of pickles before getting a little overloaded with sodium. Mmmmmm high blood pressure in a jar.... My green bean plants still haven't started putting out climbers yet. I'm starting to wonder if they ever will. There are still flowers on the plants and I'm pulling out about 1-1/2 lbs. of green beans per week (so far), so I'm not terribly worried. They seem happy. 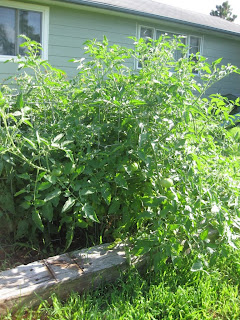 The tomatoes are happy, too. They've created their own little jungle. I am really, really liking the square cages that I got. I'll definitely replace all the round ones next year and am contemplating getting a few more now to use for stacking. These plants have already outgrown them! Yay! I hope to be completely inundated with tomatoes soon. I'm getting annoyed at having to buy tomato products (other than paste) at the store. 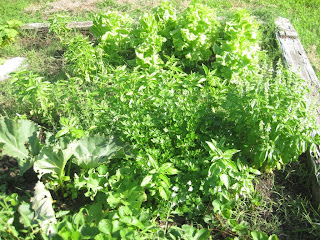 This is sort of an 'everything' shot. From the front, we have strawberries, rhubarb (that'd be the thing with the humongous leaves), herbs (basil growing wild everywhere which is fine cause I'll just make pesto and freeze it, rosemary, oregano, parsley), and then the lettuce that's starting to bolt and get bitter. Since I've never grown lettuce before, I'm just happy it's lasted this long. Here in a week or two I'll pull it out and let the ground rest before planting more lettuce in the fall. It did very well and I'm happy with it. We'll have to see about spinach. It didn't make it to the edible stage this time, but I suspect the heat had a lot to do with that. It was doing fine till the daily temps hit the mid-80s. 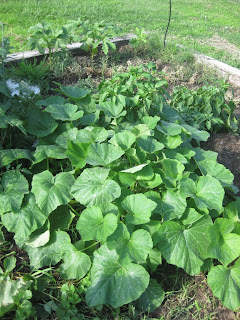 The huge thing in front here is the butternut squash plant. I've heard tell that I'm only now supposed to be planting this buuuut... oops?? It doesn't seem to be doing badly. There are about two dozen little squash on it, and we do love eating them, so I'm excited. I found a document on how to preserve it, too. I've also killed all the beetles I've seen on the plant this year, which might help matters a bit, and apparently butternut squash are more beetle-resistant than typical summer squash. I'll let you know.

Behind the squash are the peppers, peas, and okra. Peppers and okra are doing just fine, same as last year, but I have learned that peas don't like Oklahoma heat very much. They scorch pretty easily. I picked all the peas we got and yanked the plants out today and will try them again late August or early September along with more lettuce, spinach, peas, and radishes. They didn't take long to grow, so we'll see if I can manage to get a second crop. Can't hurt to try, right? If they don't make it, I'll try putting them in a shadier spot next year.

So that's the garden now!

The kids were down at Granny's (my mom's) house this weekend, so Oz got to have a nice, lazy, quiet day. I got some English banger sausage from the local farmer's market to see if he liked it (he did but said it still wasn't like 'home') and fed him that and mashed potatoes and the homegrown peas for dinner. Between that, the Jimmie Johnson NASCAR T-shirt from M1, the Chicago Bears NFL hoodie sweatshirt from M2, and Super Mario Galaxy 2 for Wii... I think he had a pretty good Father's Day. I hope all the other fathers out there did, too. What did you get for good old Dad? Do anything special? I'm always on the lookout for ideas, so I'd love to hear them!
Posted by S. at 6/20/2010 08:31:00 PM