So, because it's the middle of summer and my kids are bickering constantly and M2 has told me repeatedly that she is ready to go back to school "tomorrow," I thought I'd resurrect thoughts of formal schooling. I've had these pictures for a long time... some of them since December. The right time just hadn't come to share.

Towards the end of the school year, my homeschool group held a science fair. No judging - it's a small group and really, what's the point? - but each kid did their own scientific experiment and presented it to the others. M1 grew mold. 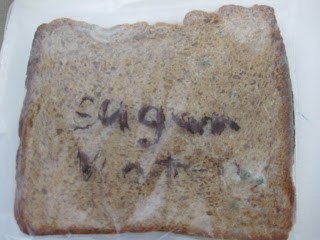 Mold, I tell you. In a dresser drawer in his room. You should have seen the other side of this piece of bread coated in sugar water. It was naaaaaaaaaaasty. 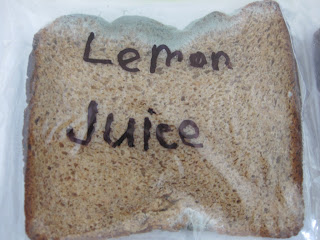 This piece didn't grow a lot... just a little around the edges where it hadn't been treated with lemon juice. 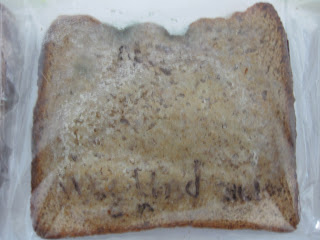 Same with this one, which is supposed to read "melted butter" but actually reads "m_ltrd ...." M1's hands were a little coated with the stuff, which then coated the bag... and the Sharpie. And Sharpie won't write on melted butter. 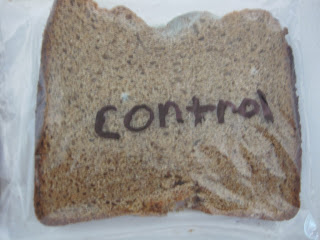 There's a little bit of mold around the edges of the control here, but it's hard to see.

All in all, the mold took about five days to grow. Ironically, since this was homemade bread, the three slices that were left of the loaf in my kitchen went moldy the same day the control did. At least I knew it was an accurate test. I'd rather have not known that. 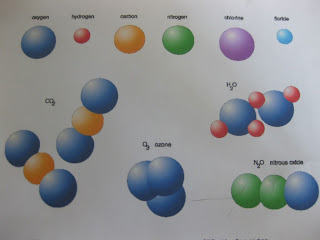 Another day, it took M1's fancy to learn about molecules. Since he has only the most rudimentary understanding of the periodic table in general, I didn't get into a lot of detail, but I did find these pictures on the lovely ol' Internetz and printed them off. I figured M1 would use Legos to build these. 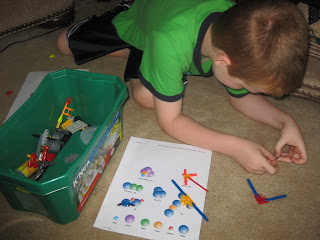 But I was WRONG. K'Nex apparently have much better molecule-constructing capabilities than Legos. He spent a good hour working out the details and putting them all together. It was really, really cute, and he was SO excited about it. 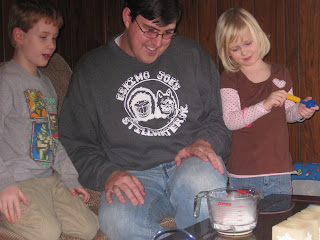 These are the pictures from December, obviously, as nobody in this house will be wearing long sleeves again until Jack Frost rears his ugly head. But Oz had gotten some dry ice in a package and wanted to show it to the kids. M1 had seen and played with dry ice before, but he didn't know what it really was and why it moved the way it did, and M2 hadn't seen it at all. 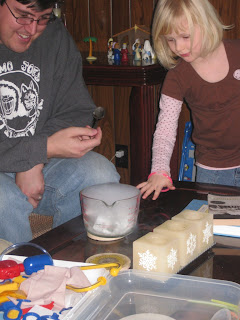