Inspired by Pioneer Woman and her adventures in tortilla-making, a few weeks ago I decided to try my hand at making my own. Except I didn't use her recipe because I had found another one online that A) used whole wheat flour and B) didn't use lard.

Theoretically, this makes the tortillas better for you. It does also, I will admit, make them a little bit tougher than regular white-flour tortillas with lard. But they are still soft and delicious, and the recipe can be doubled easily, which is what I always do since 8 tortillas barely feeds my family dinner. The pictures below are of the recipe doubled but the ingredients given are for a single recipe.

Oh, and the dough does keep nicely in the fridge for a few days. The oil will begin to separate out if you leave it in there too long, but it can be kneaded back in and still used if need be. 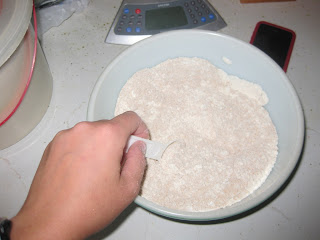 Start by mixing 1 c. each of whole wheat flour and white flour with 1 tsp. salt and 1 tsp. baking powder. 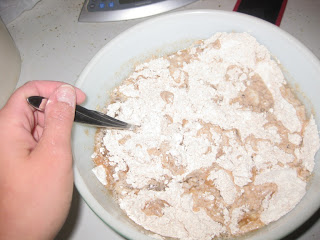 Add 4 T. canola oil (I just use plain ol' vegetable oil because I don't keep canola specifically on hand) and 2/3 c. water. Stir it all up until it comes together and then turn out onto a floured surface and knead just a few times. No need to overwork this dough :) 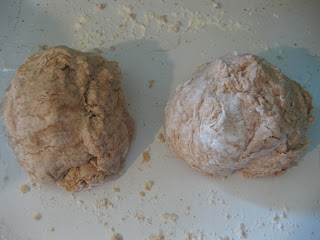 Divide the dough into balls. Each of these balls will make 8 tortillas. You could probably get a dozen small tortillas out of them, though, because... 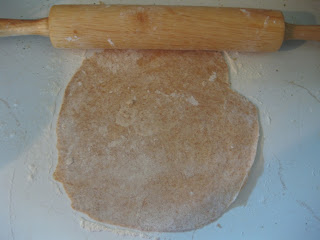 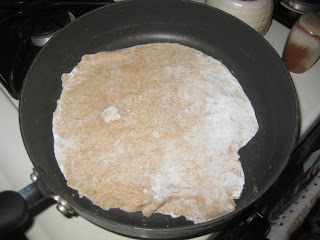 Make sure you preheat your pan to medium heat and then toss one in. It'll only take 30-45 seconds before it's ready to flip. You'll know it's ready when it looks like this: 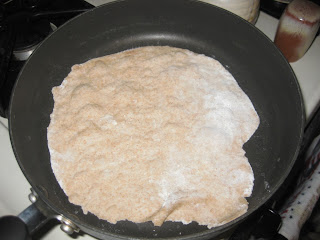 I just use a fork to flip them over and cook the other side for another 30 seconds or so. 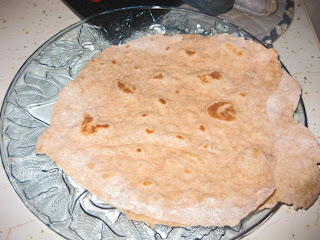 Stack them all up and resist the urge to eat them all at once.