Because the kids' friends aren't available to play on Wednesdays and we generally don't have anywhere to go other than the library, they asked for cooking lessons.

For their first lesson (mind you, my kids have plenty of experience with chopping, measuring, and mixing), I chose shepherd's pie.  There aren't a lot of ingredients, it goes together easily, and each kid can do one part.

I started with M2.  I peeled the potatoes, and she chopped them into pieces so we could mash them.  While her potatoes were boiling, I got M1 started.  His job was to chop up an onion and brown some beef. 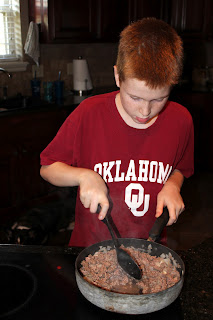 Breaking up beef uses fine motor skills, which he doesn't possess in abundance.  This was work for him, but he kept at it and did a great job. 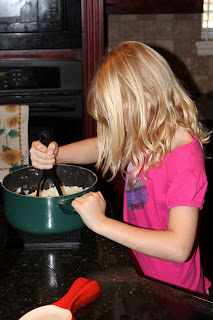 M2 used her upper body strength to mash the potatoes into submission.

Once they had their respective parts done, I put them together in the casserole dish.  M1 helped me smooth out the potatoes on top, and M2 sprinkled on some cheese.  While it was baking, we prepared some (canned) green beans, and they set the table.

I'd have taken a picture of the leftovers except... there weren't any.

Next week, we're making runsas, known as bierocks in some parts of the country.  M2 gets to chop the cabbage and brown the beef, and M1 will make the dough.  They're already looking forward to it.
Posted by Sarah at 9/13/2012 12:54:00 PM

Awww! You're such a good, creative momma!! I'm still horrified to let mine touch anything but a butter knife.