What Nobody Tells You About Beardies

So we have a bearded dragon now.  He's about six months old - born in April, according to the breeder we got him from - which makes him a juvenile. (There are four stages of bearded dragon development - babies are 0-6 mos. old, juveniles are 6-12 mos. old, subadults are 12-18 mos. old, and adults are anything older than that.)  He's about 8-10" long, so he's about an average-sized lizard.  His name is Tom.

Tom is an adventure.

When researching bearded dragons, there are tons of web sites and books on the topic.  They all say approximately the same things.  They have lots of things in common, but the thing that stands out the most is that they are all written by beardie veterans.  They do not tell you what actually caring for a beardie is like, if you've never owned one before.  This will be that post.  Consider it my PSA for the month.

First, you do your research and you try to figure out what you need, but the sources all conflict on that and so you wind up at the pet store buying The Kit.  The Kit comes with a tank, a heat lamp, a UVB bulb, a mesh cover, a food bowl, food (pellets and mealworms and papaya), water conditioner, calcisand (which is calcium carbonate... more on that later), etc., etc., etc.  You sigh and think, "Oh, good, that's everything."

Except... no.  Then you go find a Reputable Breeder.  We went to a local reptile show to pick out our baby, and the lady there was really, really helpful.  Very informative.  And also very frustrating because she promptly picked apart the kit we'd bought and told us what would and would not work with Doodlebug's new pet.

The mesh lid?  No good.  Because it blocks the UVB rays from reaching the lizard.  (Plus our giant cat that we've lovingly nicknamed Fatty Boomsticks had already jumped on the mesh lid and squashed it, and even though we put it back together... well, those things are never quite the same afterward.)  Oh, and you have to make sure to change out the bulb every six months because the amount of UVB emitted will diminish over time.  The thermometer/hygrometer?  Probably good initially but won't be entirely accurate.  Get a temperature gun for better accuracy.  The calcisand?  Throw it out.  Paper towels work.  I've read since that outdoor carpet is fine.  Our breeder uses - and now WE use - slate landscaping tiles, because #1: you don't have to replace them like you have to replace sand; #2: you don't have to worry about the lizard eating it and getting it impacted in its intestines; and #3:  it keeps the lizard's nails from growing too long.

I had not even THOUGHT about trimming lizard nails until that precise moment.  I can assure you it wouldn't have happened.  Ever.

Right.  So we take the baby - Tom, now - and a care sheet and a bunch of tiles home, fix up the cage, add the lizard.  Then comes the question of feeding it.  I picked up some turnip greens while I was at the grocery store on the same day we got Tom, and he ate those.  He ate some of the papaya.  What he wasn't eating was the mealworms or the pellets that came with The Kit.

Turns out if you buy from a Reputable Breeder (and I do recommend doing that, by the way... her babies were gorgeous, and we got to pick a really cute one... if lizards can be cute), they like live food.

Back to the store.

Buy some live superworms and crickets.  Oh, and you have to make sure that the crickets are the right size, because apparently you're supposed to have used calipers and measured the space between the lizard's eyes so you don't get crickets that are too big for your new lizard to eat.  The helpful girl at the pet store will also happily inform you that superworms can eat your lizard from the inside out if they're swallowed whole.  The internet will thankfully dispel that as myth.  What nobody mentions is that after you dust mealworms with calcium - because you have to do that once a day and dust the food with vitamins a couple times a week - and add them to the food bowl, they don't exactly stay put.

Now, if the lizard is hungry, this isn't a problem because he'll chase them down and nom them before they get away.  If your lizard has tanked up on other bugs, though, or greens, or simply isn't hungry, you're left to chase down the rest of dinner before the buggers slip into the cracks and crevices between the tiles and get stuck.  This is why, starting this evening, Tom will be eating dinner and breakfast in a separate container.  Doodlebug and I are tired of chasing down leftovers. 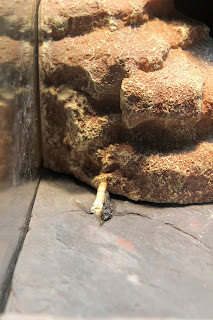 Something nobody else mentions in the care-of-reptilian-creatures pages is that you have to clean poo.  I mean, duh, right?  But apparently if your lizard doesn't poo every day, it's a sign of impaction.  And you know what happens if your lizard gorges itself on too many crickets and/or superworms and gets impacted?  It can die.  And ain't nobody got time for a dead lizard.  To clear an impaction, you fill the sink or a tub with warm, 100-ish degree water, and you let the lizard soak.  And while it's soaking, you have to massage its stomach.  Because the impaction will make itself felt on the left side of the abdomen.  And then your lizard will take a giant crap and feel better.  Please don't ask how I know.

At that point, you clean up the poo before the lizard tracks it all over the cage, and regardless of how quick you are on the poo-cleaning draw, you still have to wipe the cage down with a diluted bleach solution every week or so.

Speaking of water, lizards are also picky drinkers.  Tom seems to be especially picky.  He will not drink from his water bowl.  He will not drink if water is dripped onto his snout during his daily misting.  He likes his baths.  Specifically, he likes to drink from his baths.  But because lizards need water just like the rest of us, he will apparently need a bath... every day.

I'm sure that Doodlebug and the rest of us - Tom included - will settle into a routine soon, and then feeding and bathing and cleaning and all of that will become habit.  Right now, though, we're smack dab in the middle of the learning curve.  I just hope there aren't any casualties.
Posted by Sarah at 10/17/2013 05:10:00 PM

Wow, quite an undertaking. Good luck!

*Snortle* ok. I am SO reading this to my child who has INSISTED he AND she desperately want a lizard. Because, yeah. No. You *may* have just saved me a Ton of effort.