When you have six cats, it's inevitable that they eventually become furniture.  ﻿I don't mean that I sit on them, of course, but I do mean that I know - more or less - where they are at all times and expect them to be in their spots.  Furniture, after all, doesn't tend to get up and wander.

Around here, each cat has a designated place that he or she is usually found after the kids' bedtime hour, i.e. 8 p.m.  Tempest is usually snuggled into the crack between the cushions on the loveseat with Dorian Gray parked nearby.  Less often she will be found on the chair in my bedroom, possessing what she considers to be 'her' blanket.  Dorian still keeps the couch company, though.  Kuro likes my side of the bed.  He warms it.  It's one of the few jobs he's successful at.  Hermes migrates but usually prefers either the top of my closet or to be under someone's bed.  Vixen sleeps on M2's bed.  Pepe hauls his bony carcass into M2's pink princess chair or onto the arm of the couch.

The last few days, however, have seen a substantial shift in the behavior of the cats.  They've been... off.  A little whacked.  Completely flippin' crazy, if I'm honest.  Even Oz has noticed.

My first clue was this: 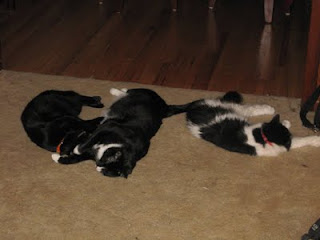 This has never happened before.  Hermes snuggling with anybody??  Dorian NOT in an upright position??  Both of them in close proximity to Pepe??
I was confused.  Then I found the rest of the cats were also in foreign positions related to their normal routine. ﻿ 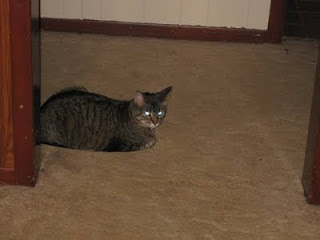 Tempest wasn't on either the couch or my chair; she was guarding the hallway.﻿ 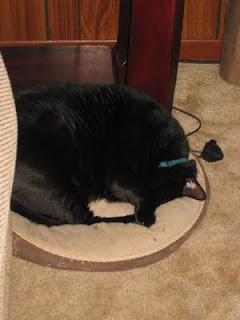 Kuro wasn't on my bed or anywhere near it... he had commandeered the dog bed that the dogs don't use. 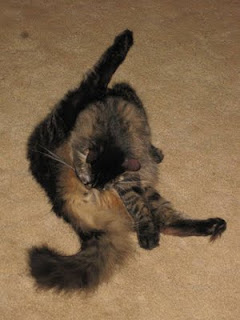 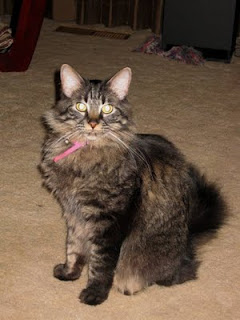 Let's just say she was none too pleased with me for finding her at all.
I'm all about variety being the spice of life, but I'd like the cats to return to predictable, please.  It's better for my sanity.  And probably this blog.﻿
Posted by Sarah at 5/03/2011 09:11:00 AM

Email ThisBlogThis!Share to TwitterShare to FacebookShare to Pinterest
Labels: cats