Yet another tradition around here - do we have enough? - is decorating sugar cookies. If I was a good blogger, I'd have taken photos of the cookie-making process, but when you're up to your elbows in dough and are busy dashing back and forth from one kid to another trying to help mix, roll, cut, breathe, blink, and NOT slip on the flour that decorates your dining room floor like an indoor snow blanket... cameras don't come in handy. In the end, though, the cookies got made (yes, I realize I could buy the dough, but the kids like making them from scratch almost as much as they like eating them), and not all of them fell apart lol. Only a few. Darn casualties of war. They were, naturally, put out of their misery as soon as possible.

Can't have any amputees.

Now... normally... I help decorate. I help spread the icing, help with the sprinkles, help make sure that the kitchen stays just this side of unsanitary should DHS randomly show up at my door... normally. (In other words, normally I care.)

This year, I got out all the sprinkles, food markers, icings, and spreaders, sat the kids down, handed them their containers of cookies, and said, "Have at it!"

The kids thought I had lost my mind at first and just sat there, waiting, thinking that at any moment Chaos Mommy is going to go back to whatever planet she came from and OCD Mommy will be back.

That's what they get for thinking. I do love mind games.

Eventually M1 picked up a spreader... 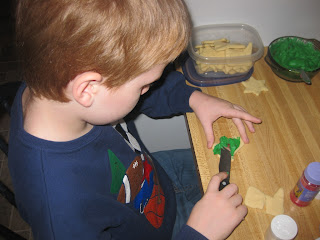 The amazement was palpable. 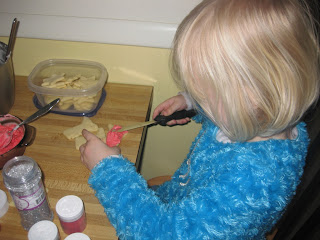 M2 quickly caught on. I provided a place for them to take their cookies when they were done and told them to let me know when they needed some wax paper in between the layers, which they did. I even provided wet paper towels for my touch-sensitive boy who didn't like the feeling of icing all over his fingers (M2 had no such qualms and was quite the little mess by the time she was done). 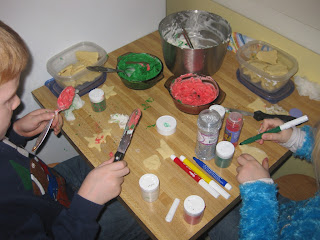 Speaking of mess, this is about three cookies in. The mess DID procreate exponentially, and when Oz showed up right as they finished, his eyes nearly bugged out of his head at the size of the mess. I'm not sure whether that was because he didn't expect the mess to be that big or if he just didn't believe me when I told him on the phone that the kitchen looked like a bomb had gone off. Either way, the reaction and the mess were both spectacular.