Remember our African feast? The kids do! So when M1 started studying the ancient Greeks as part of history and Mama said we were going to have a Greek feast, they got VERY excited. Oz was slightly less than excited since's not a fan of feta, yogurt, and many other Greek cuisine staples, but he was willing to try what I made. I could have really gotten into it and had the kids wear togas, but I think I'll wait till we have a Roman festival to do that - besides anything else, this meal was set for the same day we did the cookie decorating, and there was no way I was managing all of the above! Life's crazy enough as it is.

The first thing I made was spanakopita. 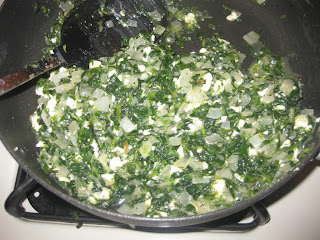 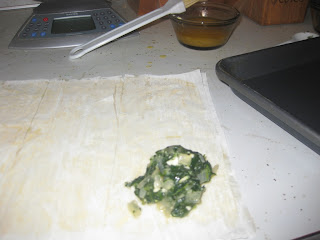 It took a little while to make, but YUM. I could not stay out of them. They reheat well, too! 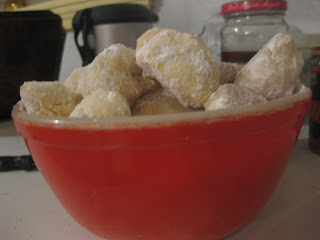 These were the cookies I made to go with the meal. They're traditional Greek cookies called kourabiethes apparently typically made at Christmastime, and they have - wait for it - brandy in them!

I also made some souvlaki with tzatziki. Oz tentatively agreed to try the tzatziki even though yogurt is on his list of theings he absolutely despises (it's a long list, but I do try to accommodate). His verdict? "It's edible!" Did I mention he also doesn't like mint, which was also in the tzatziki? I take this as high praise. 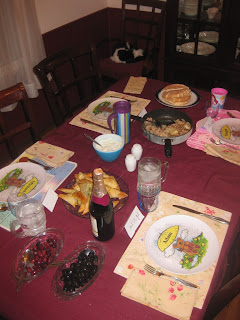 Here was the table with the meal all laid out. I also served some Kalamatas and plain black olives and got a bottle of sparkling purple grape juice. M1 even made place cards with our names written in Greek! He was delighted at his contribution. The kids now think we're going to move to Greece in a few years. I think I'm okay with that.
Posted by S. at 12/11/2009 12:03:00 AM