And Now for Something Completely Different

So... you've met my cats. You've met almost all the animals that we have around here, except the lizard which we have subsequently obtained, but for right now, the cats are the only ones that matter. 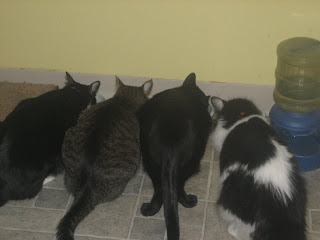 Now... focus on the black-and-white skunk-looking dude on the right. 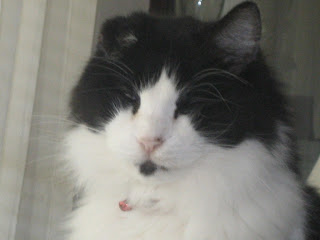 This is Pepe. He is the oldest cat of the bunch, being about 17 years old. 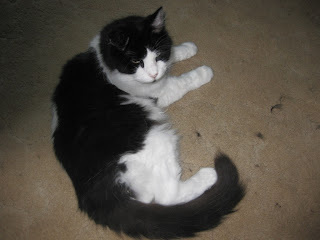 He has some weird stuff going on, like his penchant for pulling out his own fur and the fact that his right ear is permanently scarred down from a fight he reportedly got into as a kitten. He whips the dog into shape quite a bit, too, just for fun. 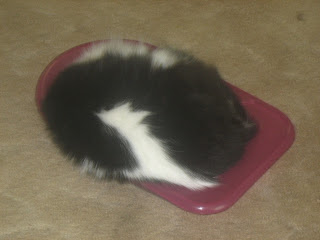 He also likes to sleep in weird places, like inside this toy bathtub, on top of the paper stacks on the desk, behind the desk on top of the power supply (which irritates Oz to no end, as he also consistently hit the power switch), and in M2's princess chair. 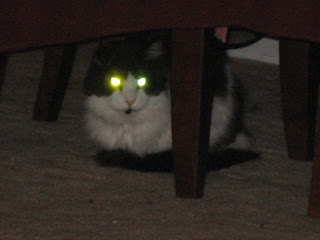 However... he's also a tough old coot! Yesterday, while the contractor was hauling in drywall, he escaped out the front door. Not usually a problem since he tends to come right back, but I hadn't factored in the fact that we have a stray that I've named Darwin living under the house... and Pepe decided he had to go scope out this abode.

We found him this evening, probably 36 hours later, under the house with nothing wrong with him other than a slightly bloody nose, some dirt in his very long fur, and a ravenous appetite.

Email ThisBlogThis!Share to TwitterShare to FacebookShare to Pinterest
Labels: cats

OMG! Poor Pepe! Glad to hear he's doing okay. Although, if any cat were to make it through an ordeal like that it would be Pepe.