Really I'm not. If you have any sort of squeamish stomach, you should stop reading now.

I've warned you! If you read on, it's at your own risk. I am not responsible for the contents of your stomach past this line.

M1 had a fish die the other day. He discovered it behind the neon-colored (and yet often covered by algae) ceramic jar he has on the bottom of his fish tank.

"Can I keep it and study the bones?"

This is where I realized that I've truly crossed some sort of line in between normal parent and home-educating parent of Science Boy.

"Sure, stick it in the lizard tank."

Now... lest ye think I'm *completely* bonkers, let me back up a tad. When the lizard died a week or two ago, I thought about cleaning out the entire vivarium, but I'm lazy and it didn't happen yet, even though the chickens will enjoy it when I do. The lizard tank had long been a self-sustaining mealworm farm as long as I occasionally threw in some of this stuff we'd bought to feed crickets ages ago, so we had beetles and worms galore scooting around the tank.

They munched on it.

So I figured they'd do the same with the fish.

Look away now if you've gotten this far out of morbid curiosity but have a weak stomach in reality. 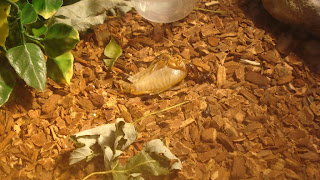 This is day 1. M1 was very excited to see how quickly the beetles and worms flocked to their new dinner. And he took a picture. 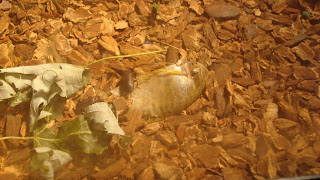 By the next morning, they had completely cleaned out the carcass. Completely. All that was left was skin and bones. The only good thing about this entire process was there was no smell whatsoever! (Ok, so then M1 decided that if the skin was WET, they'd eat the skin, and he sprayed it with water and I freaked about the potential for smell because I don't want Eau de Decomp in my house and told him to leave the heat lamp on so it'd dry out as quickly as possible, which he did and it did and all was right again... well... as right as it gets when you have a dead fish in a lizard tank being consumed by worms and beetles... yeah, I'm special...)

Then M1 took the carcass and parked it under his microscope (I really need to get him a nicer one... but good LORD, they're expensive) and checked it out. 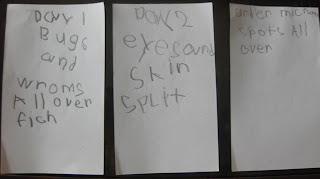 These are his observations. I have told him that as long as he understands his writing - he's dysgraphic - I'm not worried about spelling for things like scientific observations. He likes that. Oh, and he would like you to know that on Day 2, it's supposed to say, "Eyes *GONE* and skin split." Because that makes it better.

Sorry. I do know better. I just can't help myself. 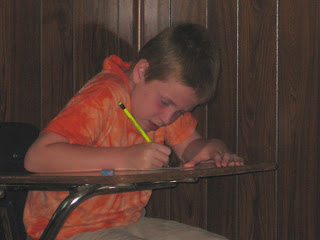 Finally he put the dried out skeleton into a glass jar and wrote a label for it with the common name "golden gourami" on one side and the scientific name "Trichogaster trichopterus" on the other.

And then he threw a fit because I made him learn to pronounce the Latin name properly.

And when his next fish dies, he wants to dissect it so he can see its heart.

I actually think it's kinda cool he wanted to check it out!! Though you're probably right, it'll get much worse before it gets better. May need to invest in hazmat suits or something? lol Or at least train him to clean up well! ;-)

Oh and Saturday night may work. I have a dance workshop all day so I maybe completely dead. Where were you all thinking?

I'm actually rather impressed with his little scientific mind. At least he knows what he loves! I would say "carry on" with that!!!

That was AWESOME!! You're the most awesome homeschool mom I know!

Just watch for salmonella or whatever one gets from those tiny turtles at the pet store. And don't slow down for roadkill...

Yeah, we had a turtle for a while. It was a red-eared slider. Came from friends who didn't plan to get a turtle but had one handed to them. We took it in. It was actually my daughter's and eventually went to a better home. And yeah, road kill and I won't be meeting ANY time soon and preferably ever!