I felt I needed to get on here and say thank you to everyone who commented about the appointment on Monday. We're just going to see her pediatrician as a starting point; same as we did for M1. If the pediatician honestly thinks there's a problem, then we'll continue on to the pediatric psychiatrist, again, same as we did with M1. I fully intend to take a ton of stuff with me - pictures she's drawn, a mood log (because holy cow - RANDOM), and if I can find a way to bring the fit videos with me, I'll take those, too.

In the meantime, she's been very busy being 5. Even with all the issues, she's still a kid who loves to have fun and I do try to help her have that when I can. 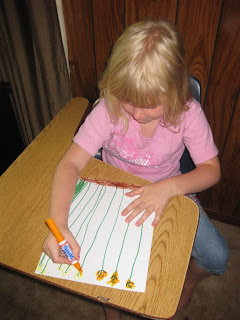 She still loves to color and draw and "do art." This particular day she had the show Oswald on her mind. It was her favorite cartoon for a long time. She wanted to draw the character Daisy and got just past this before ... OK, so it ended badly. But it was beautiful while it lasted, and I'm so glad she loves art. Don't tell her, but on kids.woot the other day they had a huge art box and Oz and I bought it to save for Christmas. It's got everything from pastel crayons to watercolors to markers and everything in between. She'll love it. 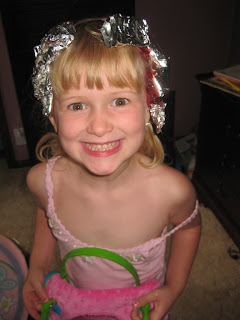 I also dyed her hair "pink" the other day. I put that in quotes because we just used Kool-Aid and she's five and she couldn't handle being in foil any longer than was absolutely necessary. 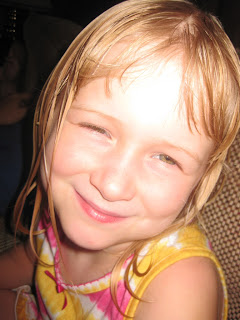 So it's BARELY pink. There's a tiny bit of what might almost be a hint of pink around her face, and she's happy. She wants to redo it sometime and make it pinker, which is fair enough, but when you go to a private school, pink hair is frowned upon which meant I needed to make sure it was going to wash out completely by the beginning of August.

I'll have a humorous post up tomorrow. At least, I'm aiming for humorous. Sometimes I think my sense of humor is a little off compared to the rest of earth's, but I'm gonna give it a shot. Let's just say the kids and I cleaned out their rooms yesterday and the results were... interesting. 'Till then!
Posted by S. at 7/10/2010 02:09:00 PM

Email ThisBlogThis!Share to TwitterShare to FacebookShare to Pinterest
Labels: M2

Take your beautiful moments when you can get them, wrap them up, and hoard them in the recesses of your heart -- store them up for the day of reconing when you'll need them to save your own life.