WHY? Why an impromptu 9-hour road trip to a town in Illinois?

Honestly, I'm still not sure. After being cooped up for (almost) two weeks straight with both kids, when I wasn't in a great place mentally anyway, I think something snapped. I posted on Facebook that I wanted to escape with the family over the weekend, and my friend R said, "COME SEE US!!!" Great Wolf Lodge had already been suggested but had to be dumped because both GWLs within driving distance were booked for the weekend, so when R said that, something in my head said, "Y'know... it's a longer drive than you'd wanted, but... WHY NOT???"

I had officially lost my mind. I knew it, but it didn't stop me. I made a mad dash to the dollar store to get Valentines for M2's class since I had decided that we would stay as long as possible, which meant driving home today and letting the kids miss a day of school, which meant that M2 would miss her Valentine's Day class party, and I wanted to act like I had SOME sort of plan in mind and wasn't slapping this whole trip together at the last nanosecond. I like pretending I'm a responsible adult.

I filled up all six cat bowls, prayed that none of them quit using the litter boxes while we were gone, left a note for the Horse Lady asking her to check on the dogs and chickens, we packed up, and we left.

We arrived in their town early Saturday afternoon (we spent the night in a hotel... free with points from Oz) and were greeted VERY enthusiastically at the door by all three of R's kids. J, the middle child who is almost certainly ADHD but all the more adorable because of it, was the most excited. The oldest child, E, and J dragged M1 off instantly. The baby girl, L, is now 3 1/2 and just SO much bigger than last time I saw her. She and M2 disappeared. R's husband, Big J, was at work. He's a priest and was teaching a class and preparing for his Sunday services, so we didn't get to see much of him, unfortunately.

R was elated to see me. I don't think we shut up all weekend... 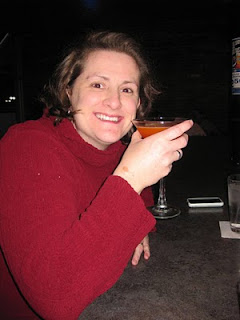 ... except when we were testing out the martinis at a local joint that has an unbelievable martini list. 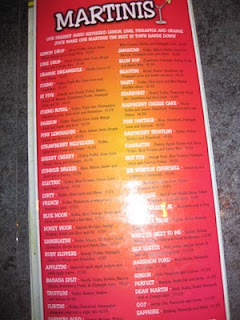 That's 46 martinis. Don't worry. We (and by we I mean *I*) only tried 3. Oz watched the kids (and by watched the kids I mean watched TV while they slept) while we went out and did this. Then we drove all around her town and she got to show me all the WONDERFUL old houses that are in her area.

She lives in one of those wonderful old houses. It needs work - a LOT of it - but it's beautiful. There are little surprises around every corner, like beautiful antique etched hinges and strikeplates and doorknobs on the doors, and there's just SO much SPACE, which is perfect for a homeschooling family of three who entertains quite a bit. The kids really had a blast. 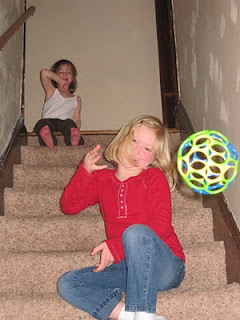 The girls never argued once the entire time we were there. L was so sad when we had to leave and can't wait to see us again. Thankfully her grandparents live just down the street from us and R is hoping to come down in a week or two to get their second vehicle, which had quit working, so we might get to see them all again very soon. (Can you imagine an extroverted mom without a vehicle, stuck in her house with three kids and homeschooling? It's not pretty, and it's why R was so ecstatic that we were really, truly coming to visit!) 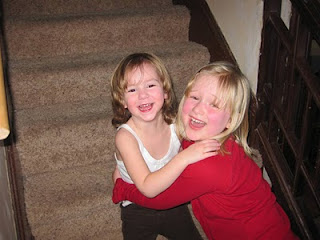 See? So happy together.

The boys had fun, too, as long as they each had enough space to expand and not kill one another with snow shovels. 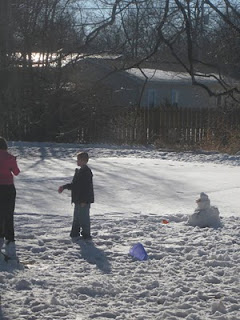 They even made a snowman out of the rapidly melting snow in the back yard. Though I think it's more like a snow duck. It was cute. 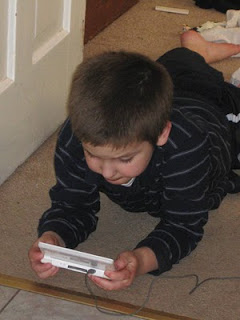 Then they all discovered their mutual love of electronics (this is a rare moment of stillness for J). 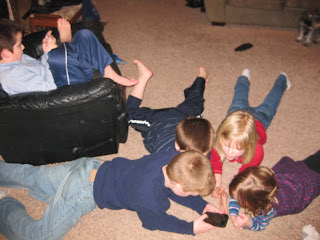 I still don't know why I felt the need to go to Illinois, but while I was there, I found something I'd lost: My smile. I feel like I can laugh again, and after all the snow and wintery weather we've had here lately, I hadn't done that often. I'm so grateful to R for putting us up on short notice, and I can't wait to do it again... though maybe next time, we'll call and plan things out first ;)
Posted by Sarah at 2/14/2011 08:15:00 PM

We were so blessed to have you all! Thank you for making the long trek to Macomb. Such great memories! R

How fun. Geez that martini list did look good!