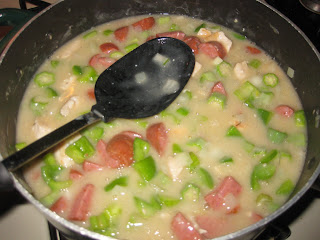 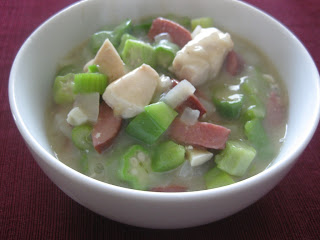 It's one of the great joys of living in a world with okra. Some people make it without okra. I suppose that's their right, if they can't handle the true sliminess that gumbo should be, but gumbo without okra doesn't exist in my happy little mind.

It's also one of THE easiest things to make. So simple. In fact, I don't even use a recipe any more. I used to, back before I discovered how simple real Southern cooking can be.

1. Put equal parts flour and vegetable oil into a pot on medium heat. Stir this together and let it simmer until it's as dark as you want it to be. This is a roux. I was making a chicken and andouille sausage gumbo, so I didn't want it too dark. If it had been a seafood or just a plain sausage gumbo, I'd have probably gone darker. Keep an eye on this, because it's your thickening agent and will determine how much broth you add later. I used 1/3 c. oil and 1/3 c. flour, I believe. It might have been 1/2 c. each.

2. Once the roux is the color you want, throw in equal parts of bell pepper, celery, and onion, all chopped. You can throw in a clove or two of minced garlic if you like as well. Stir and make sure these don't burn, either. The roux will stick to them. Saute until soft.

3. Add broth. Just about any kind will do as long as it complements what sort of meat you're adding. I say that, but I had some crawfish broth frozen in my freezer from when I'd boiled some crawfish heads in February when we had our Early Mardi Gras party, so I used that and a bit of water. I think I had about 2-3 c. of liquid in there. Start light; you can always add more if it's too thick, but it's tough to thicken it later if it's too thin.

4. "Double, double, boil and bubble. Fire burn and cauldron bubble." Step back, throw in as much sliced okra as you have/want, some cayenne to taste, salt, pepper, and let this thing go for about 20 minutes. You can put in a bay leaf if you want, too, but I usually think it's too much of a pain in the butt to find later.

5. Add any more liquid if needed and throw in the seafood, diced sausage, and/or COOKED diced chicken... whatever meat you're using. The seafood will cook quickly and can be cooked right into the gumbo, and the sausage will be pre-smoked, but the chicken should probably be already cooked. At least, that's the way I do it. You'll need about a total of 1-2 pounds of meat for an entire gumbo. Let this go until the meat is cooked/heated through, about 10 minutes.