Gingerbread: A Study in Contrasts

Decorating gingerbread creations isn't necessarily an annual tradition around here, but it was one of the things on The List when we created our Christmas Countdown Chain, so there ya go. Except I decided to go with trees instead of houses because A) they take up less space and B) they're not as complicated, which agrees with M1 just fine.

You'll see what I mean in a minute.

I got the boxes out. I made the first batch of powdered royal icing from the packet that came with the kit. I inwardly rejoiced at my wisdom to buy a kit because I wouldn't have to clean icing tips, which is a pain in the backside at the best of times. And I let the kids have at it.

And then I reveled in the glory of my children's unique and highly individualized personalities. 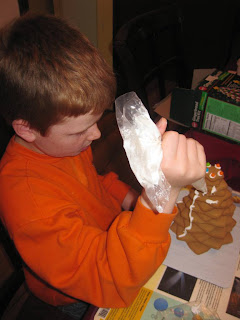 M1 took to decorating with relish. He decided he was going to create stripes, stripes, and more stripes on his. "M1, did you forget there's also green icing?"

(For the record, his tree has a single green stripe. The End.) 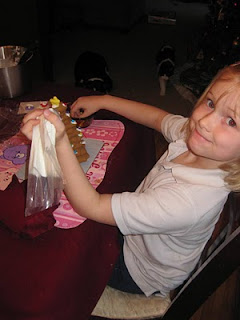 M2 had to make everything JUST SO. And by Just So, I mean that everything had to line up perfectly and all dots had to be of equal size. If they didn't meet standards, they were scraped off and reapplied. 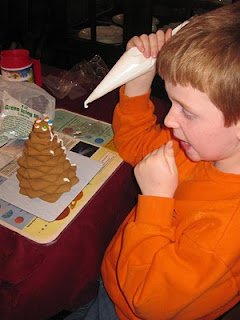 M1 enjoyed the scrape and reapply part, though for a slightly different reason... 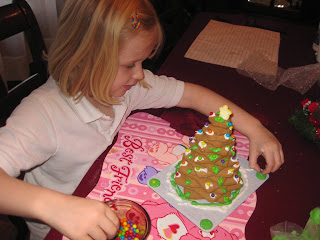 M2's candy had to be meticulously applied, and when she accidentally dropped a purple candy where a yellow was supposed to go... well, you get the idea. 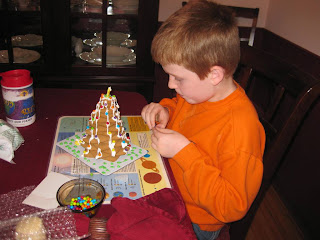 M1 did not share this need. For him, the idea was to stick as many candies as possible on one gingerbread tree. When M2 got done with hers and had leftover candy, he pounced. "Can I have it?

"Okay, M1, you can have it. I'm doing a nice thing by letting you have these instead of eating them, you know."

*forehead smack from the mom* 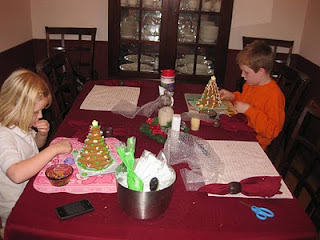 See the differences? Even their clothes tell a story. M1 wouldn't be caught dead in short sleeves after Labor Day; M2 believes her short sleeves are a statement all their own. 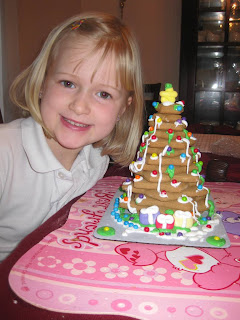 And when we all got done, M2 insisted on posing for a picture with her creation. M1? He bailed. Lickety-split down the hall before I could even ask if he wanted to do the same.

Oh, they're great! I was so waiting for the perfectionist melt-down screaming jag, and you didn't have one -- I'm so glad!!

LOL nooo that'll come on Sunday when we decorate cookies. That's when the meltdowns happen.