It's that time of year again, when children all over turn their thoughts to gifts and Christmas and Santa and ponder what they can get out of The Man in Red. Which is really cute sometimes, especially when your 5-year-old daughter turns to you and says, "Mom, what are you putting on your list for Santa? What does he bring you?"

Anyway, Ye Olde Christmas Chain said that yesterday was the day for writing letters to Santa. The kids sit down in their desks, newly relocated into the hall for the holiday season, and scrawl off their deepest desires. Then they put them in their stockings for the elves to come and swipe to take back to the North Pole so Santa can go through his inventory and toy-making checklist and see what can be done for these children who have been good (because "I've been really, good, Mom! And the elves will tell him that, too!" I may have put it into my kids' heads that the elves are also Santa's spies and peer into our house at random intervals all year long to do random behavior checks. Yes, I am totally that evil).

As expected, M1 got done with his letter first. Most of it isn't very surprising. We're actually getting him a netbook, so yay for getting something right. One item on his list, though, was completely unexpected. See if you can figure out which one it was. 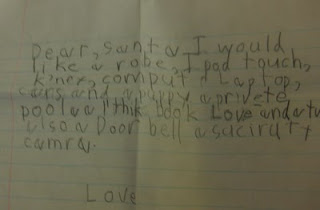 If you guessed the puppy, you're right. Is it an age thing for boys, to want a puppy? A PUPPY?? I barely do dogs. We have two of them already, and thankfully they're housebroken. There's no way I would have the patience to housebreak and train a puppy, and ADHD boy would care for it for about, oh, 35 seconds, until it chewed something up or peed on something, and then it would be my job. Thank you, NO. Still, it cracked me up. He must think Santa loves him way more than he actually does. Santa doesn't want puppy pee in his sleigh, either.

The 1' thick book also made me giggle. He knew what he was doing when he wrote it, and he really did mean one foot thick. I asked.

M2 decided to write hers with red marker, and I was not allowed to watch the process, which meant that deciphering the letter later was, well... 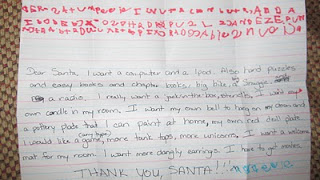 The actual text of her letter reads as follows: "Dear Santa Maggie I want a computer [note: she doesn't mean a real computer, just a toy one], and a Ipod, also hard puzzles, and easy books, and chapter books, bike, radio, a big Snuggie."

As you can see, the list expanded somewhat when I helped her translate her miniscule scrawl into English. Her last sentence was (is) my favorite.

My children amuse me greatly. They're great for comic relief. I'm saving the letters to show to their significant others in 20 years. That ought to provide comic relief, too.

I was actually crazy enough last year to not just get one puppy, but two - one for each kid! I know - I totally fell off my rocker last year! My kids won't be getting any more of those for a LONG time!!! My kids' wish lists are LONG. I had to remind them that those were merely suggestions and that they would NOT be getting everything on the list!!!