Science reigns supreme around here. No matter what I do, we always wind up "doing science" in a big way. Big changes for a Mama who avoided science classes like the Black Plague as soon as they were no longer required. Luckily, first grade life science is a lot of fun most of the time. I say that now. I'm sure I'll eat those words later this year.

I'm also part of a great group called Tulsa Area Homeschoolers. Our fearless leader, Cheryl, is always up to stuff.

A couple of months ago, she contacted her old geology professor and asked if he'd be willing to do a fossil tour for a bunch of homeschooled kids and their parents. That sweet, sweet man was kind enough to say yes. We met up at a park that overlooks the river and that has plenty of rock formation sticking up everywhere. The kids were actually climbing on the remnants of a small landslide as we waited for the professor to arrive.

Just for the record, watching my totally non-athletic just-turned-7-year-old son climbing high up on the rocks and perching precariously on the ledge is nearly enough to give me a heart attack. It was definitely enough to make me calculate the distance to the nearest hospital versus the ETA of an ambulance if I wound up dialing 911. He managed to make it down, though, and the prof gave us a brief overview of the history of the land (who knew the land used to be hanging out around the equator?) before leading us down the highway to our fossil-finding site.

The site was full of more sheer rocks - this time made of shale rather than limestone (be still, my quaking heart... there were kids sliding downhill toward the highway left and right) - and definitely a haven for fossils. 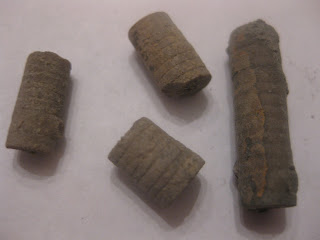 The most abundant fossils were crinoids. They were everywhere, and most of them were pretty small. The 'big' one you see here is probably only 3/4" long. 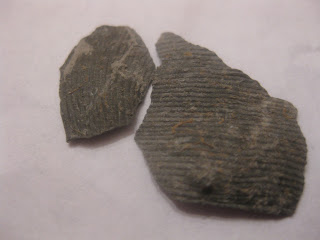 The prof informed me that these fragments are actually fossilized ancient clam shells that had very thin skin and are hardly ever found whole.

Rare fossils were not on the list on this excursion. 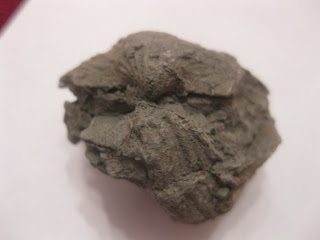 This is the fossil of a brachiopod. You can see where the two shells would have been hinged together. This is the biggest fossil we managed to find.

However, after finding those and numerous other fossils, would you like to know what excited M1 the most?

Not the crinoids or the clam shells or the brachiopods... 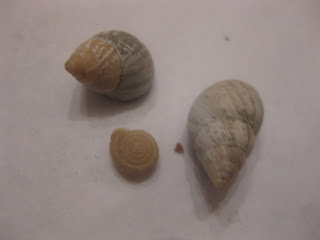 Not even the hundreds of fresh snail shells that also dotted the land which we were searching... 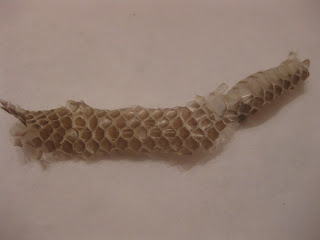 It was the 3"-long snakeskin.

If I had ever, even for a second, imagined that he might one day be a famous paleontologist, I do believe that thought just flew out the window. Fossils are cool, but snakes are better. He was only upset that he couldn't find the skin's original owner.
Posted by S. at 10/20/2009 10:26:00 PM

Sounds like a cool field trip!I think my boys would have been all over the shells the most.