Party season, that is... Halloween parties, holiday parties - lots and lots of parties! 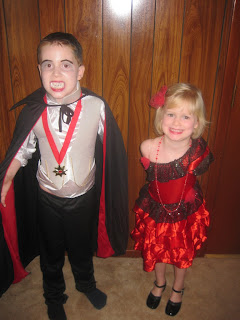 This year, I took Dracula and a "Spanish princess" to the party with me. Yes, Drac is usually a redhead, but he insisted on getting his hair dyed this year. He really enjoyed it till he realized he had to wait for it to dry! He also loved having his face painted except for getting the 'blood' on his lips.

My princess, on the other hand, loved all the make-up. Since it was the first time she's ever had permission to wear Mama's make-up, she kept asking if it was really okay for her to wear it. I look at her in make-up, though, and finally understand why people say she looks like me. She does! Her smile in that photo is almost like my mother's.. I'll have to post some generational photos sometime because my mother looks remarkably like her grandmother, too.

Moving swiftly on from that particularly frightening line of thought... 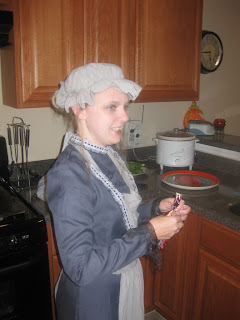 S was our party hostess. Because I realized the other day that I need better nicknames rather than just initials for my friends, I shall now refer to this friend as Nan, mostly because she used to work as a nanny before she got her current job. Nan is a fantastic hostess. I should have taken pictures of the food, but there was hummus (dyed green) with veggies, 'mummy' pizzas (olives for eyes surrounded by split-up string cheese baked on English muffins), baked biscuit dough 'fingers' (olives for fingernails), meringue cookie 'bones,' crockpot cider, etc. Did I mention she's vegetarian? My friend B (who shall now be Shelley... as in Mary Shelley of Frankenstein fame... because she has a twisted enough and creative enough mind to come up with something like that herself) brought some cream cheese pumpkin dip and apples, and another mutual friend of ours brought a chocolate cake. 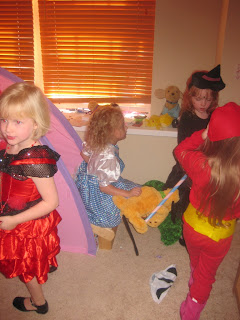 The kids played in Nan's daughter's room, which is a fairy princess dream come true. That thing that "Dorothy" (Nan's daughter) is sitting on is a SLIDE that comes down off the BED. Underneath the bed is a playhouse, and the whole thing is shaped like a castle. It's beyond gorgeous. 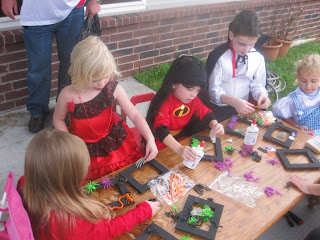 Nan also came up with a craft for the kids, letting them decorate picture frames with Halloween decor. When the glue didn't work out so well, she broke out the hot glue gun to make sure their frames were masterpieces that they'll really enjoy for a long time to come. 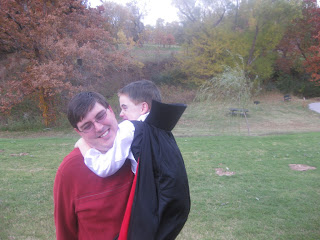 I think even Oz was bitten by the party bug and had a good time.