Fun with Math and Science

So now that we're a couple months into this homeschooling bit, I've learned a few things. They may sound simplistic, but sometimes the simple truths are the hardest to learn. I'm learning that the hard way, too. ;)

1. No matter how good the curriculum is, you're going to have to supplement with something.

2. Necessity is the mother of invention.

3. When the kid gets excited, you know you've hit it right.

All that being said, M1 was having a hard time with learning addition. He had the basics, knew what he was doing, but c'mon... memorizing facts is boring. Every kid knows that. I don't know a person in the world who thinks sitting around saying "2+3=5" over... and over... and over... is fun.

I know there are a ton of math games out there, but it's tough for me to know which one is going to be fun for MY kid (and what might be fun for M1 might be totally dull for M2, if and when she comes home), so... see #2 above.

So, when I came to the knowledge that something other than flash cards and repetition were needed to help M1 master his addition facts, I did what every good mom does. I improvised! 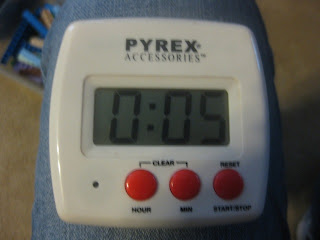 First, I broke out the timer. Five minutes is a good time for a 7-year-old with ADHD, right? OK, OK, I admit, there are times we play 2-minute rounds.

Next, I got out the 10-sided dice. Two of them. Yes, I had these on hand, but you can purchase them in learning stores or... well... at gaming stores. My mother-in-law actually had donated a couple of sets of dice to me a few years back, and I'm kind of a pack rat like that, so I still had them. Yes, that is the truth. I swear! ;) 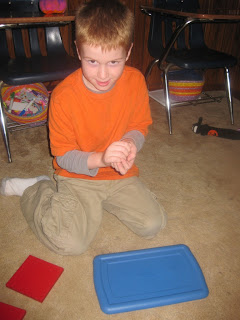 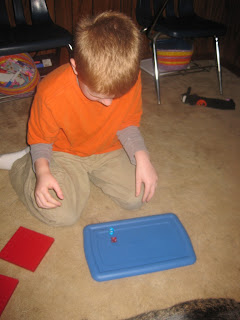 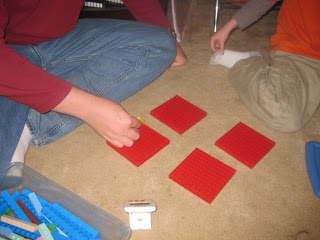 And have the adult put the sum on something so it can be visualized.
The goal? We're starting out with getting the totals to reach 100 in five minutes. It's possible! He's done it! As he gets faster, I'll up the ante and have him aim for 200. He's gotten close already, 170-something the other day. If he misses an answer, he has to stop and repeat the problem with the correct answer (so if he says 7+4=10, he has to stop and repeat after me that 7+4=11). Losing the time in repeating can be a big penalty, and it's also a great motivator for him to work on his flash cards so he can get faster.

He also had been getting bored with science. OK, not bored with the lessons, per se, since he likes the stuff, but it isn't very in-depth for him. The lessons are great, and he's learning, but there's not a lot of repetition and the lessons are simple enough that we are able to complete the reading and all the labs in an hour or so. Hm. This made me think about supplementation. I asked some women on a classical education forum what they suggested, and they led me to the site http://www.eequalsmcq.com/. The life science curriculum is free to download, and HOLY COW. I've never seen M1 so excited about doing worksheets. He learned definitions, giggled at the humor, and was so happy! Just doing the reading and the worksheets took him about 45 minutes, which means we're saving the two labs (two or so for each lesson) for other days. He's even requesting the curriculum on days when we don't usually have science scheduled. He reads science books all the time and requests labs and experiments, but usually they're not from the curriculum. So yay!

I finally feel like I'm getting to the point where he really likes everything we're doing, and I also feel like it's enough for him. I'd read once that it takes a year to really figure out what a kid needs in terms of being taught, and I think that's just about right. I'm sure there will be more revelations in the future, but at the moment, I'm sure happy with math and science!
Posted by S. at 10/23/2009 09:14:00 PM

I love the 10 sieded dice idea! Thanks for sharing.