I made my first pear pie of the season today. I love pear pie. I grew up with pear pie. I remember going out to my grandmother's farm and climbing the pear tree and tossing pears down to my family below - and if the family didn't catch them, the cows did! Climbing down was always harder than climbing up, but only because by the time I was done, the cows were crowding the bottom. Herefords, they were. That's what my uncle raised, God bless his soul.

People always act amazed when I say I make pear pie because apparently it's not all that common. It's a lot like apple pie with just a few differences. When pears went on sale at the grocery store this week, however, I knew it was time for pear pie. 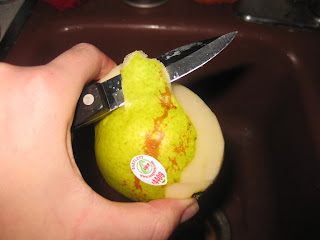 Of course, you have to start by peeling, coring, and slicing the pears. You'll need 5-6 cups. I always prefer more to fewer, so I always do at least five good-sized pears - six is really better. I am a lot like my grandmother and really dislike an "empty" pie. Seeing as she is the one who taught me to make pie to begin with, this makes a lot of sense. I still use her handwritten recipe to make crust.

I also always use very firm, green pears. Once they get soft, they tend to turn into a mushy pie, so buy the very firm ones. If you don't use all of them, just leave them out for a day or two and they'll get softer. They make great fall table decorations while you're waiting! 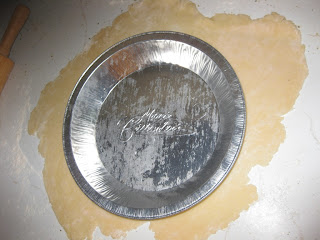 Of course, then you have to roll out the crust. Please ignore the brand name on the pan. They do have good pie pans, though, and I have reused this one numerous times. They withstand knives very, very well. 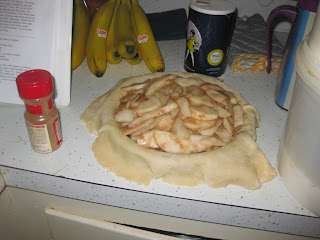 You toss the pears with a flour/sugar/spice mixture that I've posted both below and on Tasty Kitchen. The secret ingredient is below as well. Though I suppose now that it's posted on the World Wide Web, it's not so secret any more, is it? It's not something you'll find in every spice cabinet, but it makes the pie even more wonderful and unique. 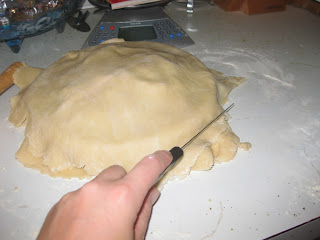 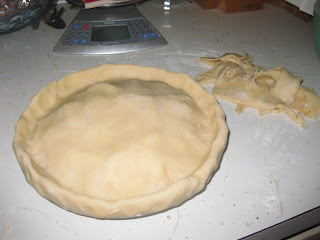 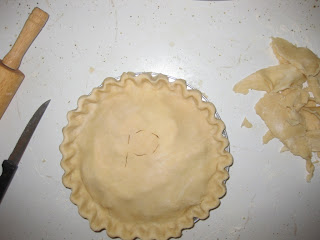 Those scraps tease me even when the pie looks this good... 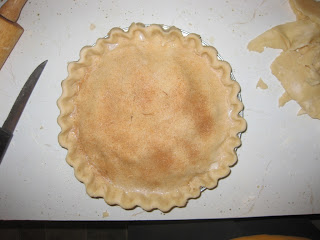 They taunt me even more when I top the pie with cinnamon and sugar. You'll see why in a minute. 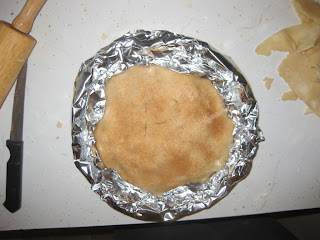 I get really excited when it's almost time to put the pie in the oven, because it means I'm almost ready to deal with the scraps. 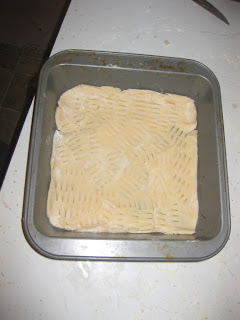 This is what happens to those scraps. I roll them back out and stick them in a regular pan. You have to prick the crust or it'll burn and won't taste good at all. So prick, coat it with beaten egg or milk (whichever you use to top the pie) and then cover it all with cinnamon and sugar. Bake this for 10-15 minutes at the same temperature you're baking the pie. 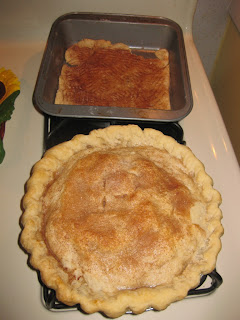 And that way, when it's all said and done, you not only have a gorgeous, delicious pie to eat, you also have a snack to nosh on while the pie is cooling! The kids think it makes a fantastic breakfast, too. Cinnamon-sugar pie crust is the bomb.
There's nothing quite like cinnamon-sugar pie crust...
It's enough to drive a girl to distraction.
Which reminds me... before I get distracted too much, I have to share my secret ingredient! 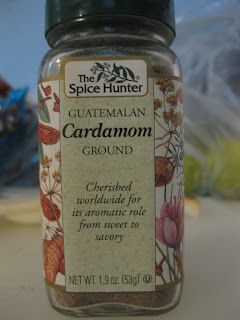 Cardamom makes a pear pie have a little extra kick to it. Technically you could put it in an apple pie, too, but really, apples are sweeter than pears and don't quite have the right flavor for cardamom.
Hope you enjoy this recipe as much as I do!

I've never made a pie before, but have always wanted to. This just might be the one I try!

Thanks for sharing- I love the way you write. :)