I can't decide whether today is going well or not.

On the one hand, Oz re-stapled together M2's box springs so the cats can no longer climb in the bottom and consider it a hidey-hole.

BUT... that meant I had to wash sheets today, and while I don't mind throwing the sheets in the washer and then into the dryer, I *HATE* folding sheets. I am fully capable of doing it, I just don't want to. It a specific point of laziness/OCD-ness. There is no piece of furniture big enough to really hold the fitted sheets well, and unless the floor has been recently vacuumed (which... haha... it kinda hasn't), I don't want to put fresh, nice-smelling, clean sheets on the floor, so I wind up doing this weird contortionist dance in the middle of the living room to try to get them folded as nicely as possible so they can fit into my overly-stuffed linen closet in just the right way.

Then again... I love sleeping on clean sheets, especially if I also happen to wash my hair the same evening.

I got the garden weeded.

The down side of that is that I might have been pretending that every weed was my boss. She's not popular with me right now. She is probably doing her best, but there are times "best" is just not good enough, and this is one of those times. And if she doesn't call me back by Wednesday afternoon, matters are going to have to escalate. I've been waiting for five months for things to get fixed. That's the hibernation period of many animals.

Consider me a grumpy mama bear coming out of her hole.

Then again... the garden looks much better than it did first thing this morning, and M1 got to feed the chicks all the crickets I unearthed. That caused him great delight.

I called the pediatrician's office today to get copies of M1's vaccination list and a new script for an inhaler to take with him to camp later this summer, and I was reminded of how much I truly love my pediatrician and her entire staff. Things are already done. It took less than 15 minutes.

However, in this ENTIRE metropolitan area, population approximately 385,000 as of 2007, there is NO playgroup/social skills group for children of elementary school age who have been diagnosed with Asperger's. Nothing. In German, if you like, NICHTS. In Spanish, NADA. Absolutely NOTHING.

Teens and adolescents (ages 12+)? Yes. Children who are pre-elementary (ages 3-6)? Yes. Elementary school kids? See previous rant-filled paragraph. I had really been hoping that the group that advertised itself as a group for "children and adolescents" would be the place for him to go, since it meets monthly, but apparently the word children is used to describe tweens. The lady did at least acknowledge the shortcoming, but come ON, folks... ages 7-12 get nothing?? These are formative years, when the kids neeeeeed to work on social skills. And I can assure you that an Asperger's child is getting very, very little help in the way of social skills in a school setting, unless you count being teased and being the odd one out as 'social skills' training. Which, obviously, I don't.

The only good thing that has come out of this is that I ate the last of the strawberry-rhubarb pie and the last of the vanilla-with-strawberries-in-it ice cream for lunch today.

Makes me want to do THIS: 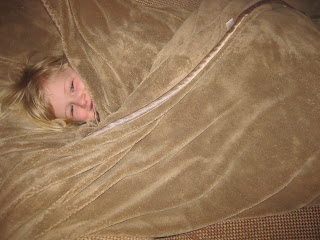