Other things 'they' don't tell you about chicks

I've learned a few more things about chicks over the past week. Things that 'they' don't tell you on the lovely education sites that are run by people who have been raising chicks for years and have forgotten what newbies *really* want to know. 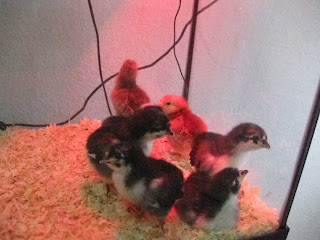 1. The darn things grow FAST. Remember how teeny-tiny they were originally? This is four days later. 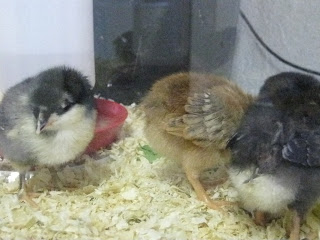 FOUR days later, and they've got half their wing feathers in. 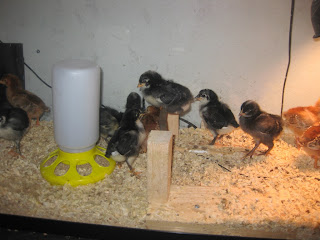 This is day 9. They can already fly up and sit on a perch. Or the top of the feeder. Or the top of the watering container. And sit there. And poop in the water. Or the food. They are also learning to take catnaps (chicknaps?) standing up, which is hilarious because they look like little bobbleheads and one day I swear I'm going to walk out and watch one plop headfirst into the bedding, and I might laugh, just a little. And then I'll feel compelled to make sure it's still alive. 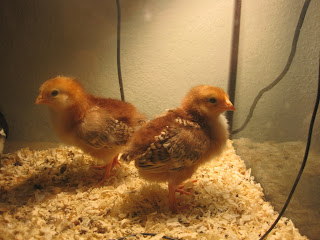 2. Moving on, nobody tells you how much they EAT and DRINK, either, to grow this fast (still day 9, by the way). They go through about 1-2 quarts of food and water per day. Which isn't a lot divided among 12 chicks, I suppose, but still. It seems like all I do is provide refills. 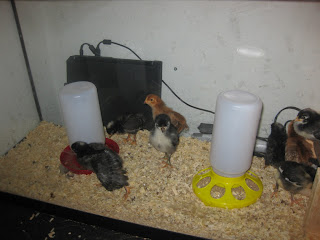 3. Baby chickens learn to scratch very quickly, and it's a HUGE mess. I have to clean out the water and food containers several times a day because they fill them up with bedding. The scratching can be a whole lot of fun, though, especially if you're like me and see them doing it and are inspired to help them along.

M1 has a lizard. Specifically, it's an anole. Even more specifically, it's a picky eater of an anole who likes to leave the mealworms in the bottom of its cage and eat the crickets and other occasional bugs M1 finds before going back to mealworms as a last resort. So we have a thriving mealworm colony that I just have left alone because it saves me the effort and money of buying new ones that it likely won't eat, anyway.

Adult mealworm beetles make great chick treats. I advise you to watch the video. Even if you aren't amused by the chick running around with a beetle in its beak trying to find a place to eat it in peace, you might enjoy the dialogue between M2 and her daddy in the background. He's sitting on a giant Sam's Club container of cat litter and, well... you'll just have to listen for yourself.

wow, they are getting big! I guess thats why the sell day-old chickens? gotta get them while they're cute and fuzzy ;)

Well, that and apparently when chicks are born they've just digested the yolk, so they have about three days of food in their stomachs and can be shipped wherever. :)

So cute! Thanks for the lesson...I actually learned something. :) - Lizz M.

Mmmkay can I say I LOVE the accent?! I'll probably be going around talking in my British accent all day now, only because I do can the brit accent without thinking, the Australian still take a bit o' practice :)

Hehehe I tell Oz all the time that I only married him for the accent. Our wedding/marriage story is a REALLY long story in itself. I'll probably post it in a week or two because our 10-year anniversary is coming up. :)