I've been wonderfully lucky to find a homeschool group to participate in that works for my family. I've tried one, I've tried another, and they always seem to not work out for the same reason: Time management. Many homeschool groups seem to meet in the afternoon, which is great if it's timed perfectly or on my side of town, and I totally understand that most homeschool group members are available at that time of day, but I have to pick up M2, and that throws the whole schedule off.

So when a woman I'd met a few times started up her own group and wanted to meet on my side of the river, I thought I'd give it a shot, because even if the time was pushing the envelope for picking up M2, I'd at least be close at hand. Couldn't hurt, right?

It's been a better fit than I ever thought possible.

Last month, our monthly meeting theme was arts and crafts. Our fearless leader led one craft; I led another. 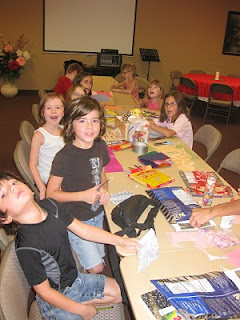 The kids are always up for something new and fun! 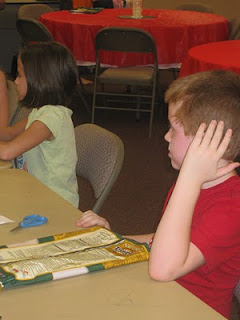 OK, except for M1, who gets kind of bored when he has to sit for more than fifteen seconds at a time. But even he perked up when we started working on making the actual project.

This month's meeting was about Latin America, led by a woman who was born in Panama. She taught the kids a few basic words and phrases, talked about customs such as Dia de los Muertes, and led them in creating Lucha Libre masks.

Then this weekend, we held a fall festival. We thought about renting a venue, but I figured what the hey, I've got a big yard, let's DO IT!!! 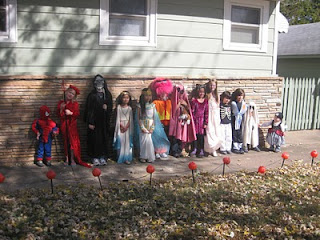 Welcome to Fall Festival 2010. We started with a costume 'contest.' One of the moms made little prizes for each kid based on their own costume. More on that in a bit. 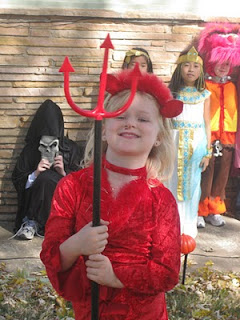 M2 enjoyed being the devil... cat. I guess she's decided her horns are actually cat ears, and her tail is a cat tail. I can live with that! 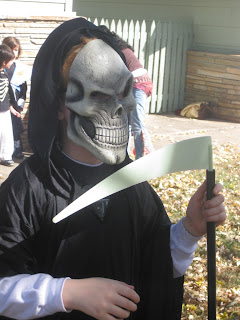 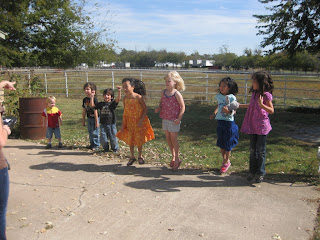 They changed out of their costumes and played a game called "In the River, On the Bank" and won prizes. 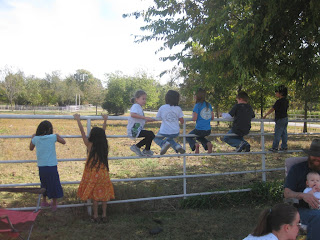 We all ate lunch and bonded with one another, sometimes over a good pipe fence. 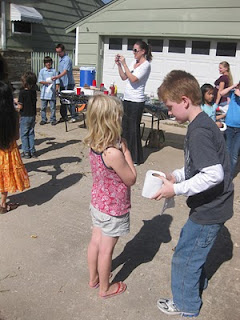 Then we played the Mummy game, where the first one done got a prize and the best-'dressed' mummy won a prize. 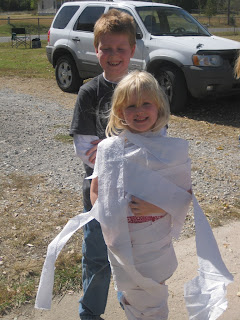 M1 and M2 didn't win either, but they had fun, so who cared?? There were plenty of prizes for everyone, anyway.

So we all had a great time. I think. I hope we can do it again next year, and I hope the weather is just as beautiful then as it was yesterday. I even came out of it with what is probably the last sunburn of the year! The kids, even better, were exhausted.

When I was on my way to bed, I stepped into M1's room to check on him and saw this stuck in the top of his fish tank: 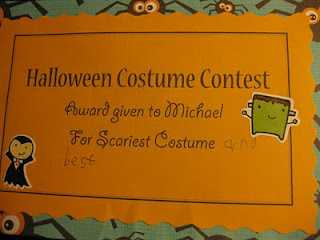 It was his prize from the costume contest... slightly altered.

Sounds wonderful -- and the weather was perfect! Up North, they fight the cold at Halloween, but we find ourselves fighting the heat. This year? PERFECT.

Wish I could find more than one group here, but no. Just the tea-partying fundamentalists. *sigh* I hate The South.

Yay for our group :) lol Mom on the Verge, where are you at?