Feast of the Moors

First of all, an update.  The children's ears are still intact.  All four of them still contain berries.  They have a simultaneous appointment at the ENT, given to me by a very amused receptionist, next Tuesday at 9 a.m.  I fully intend to take photos of the final berry count.
The berries in question, by the way, are hackberries.  I was just glad to at least know, because those aren't poisonous.
Still.
-----
Moving on.
M1 has been studying Islam in history this year, and he's really enjoying it, so when we got to the Moors and how they ruled Spain for many years, I decided it was time for one of our traditions:  A "Feast."
There was a recipe for Pollo con Arroz in our history book, but since I *can't* eat pollo and M1 *won't* eat pollo, that was out.  So I went hunting for authentic-esque Moor-ish vegetarian recipes that M1 and I could (mostly) fix together.
We started out with a garlic Parmesan spread for our bread.  It was SO easy.  M1 mixed it up. 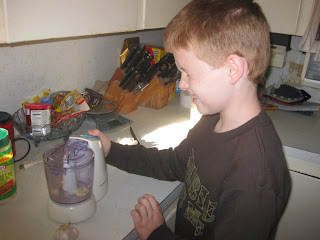 I love this photo.  Why?  Look on the counter, just to the left of the mixer.  See that cord?  See how it's not plugged in?  Anticipation Boy was incredibly shocked when he pushed the button and nothing happened. 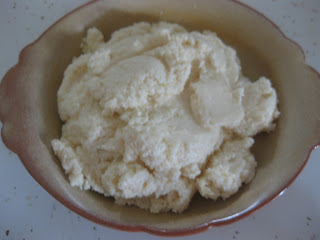 Once he plugged in the mixer, we chopped up several cloves of garlic, then added about a cup of grated Parmesan cheese and mixed it all together with water until it made a paste.  Fresh cheese probably would have worked better, but it wasn't in the house, and I wasn't going to put on socially-acceptable clothes that day.  But I can tell you, this was DELICIOUS.  I recommend serving it at room temperature. 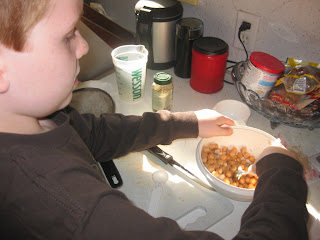 Then we whipped up a chickpea salad with honey dressing.  M1 loved it; the rest of us thought it was okay. 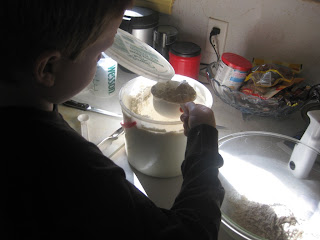 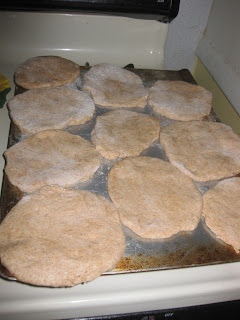 We made whole wheat flatbreads... 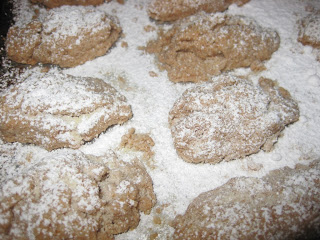 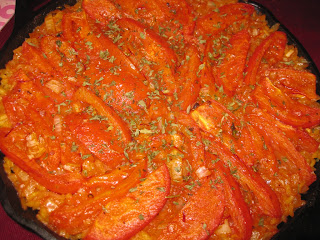 ﻿
The piece de resistance, however, was the paella.  I've tried making paellas before, and they've always come out as dismal failures.  I have now learned why.
1.  Do not use long-grain rice.
2.  Do not use long-grain rice.
Short-grain rice or, in this case, arborio rice (which, yes, I know, it's pasta, but hey, I had it on hand) works beautifully.  This was a meat-free dish, but it could be easily modified to add chicken or other ingredients.
And yes, I spent $9 and got the actual tiny little container of saffron for this dish.  I don't know how much it added in the way of flavor, though, so next time I might just stick with turmeric.
The real Moors will never know.
Posted by S. at 10/15/2010 12:32:00 PM

I'm still trying to get through Story of the World, Vol 1. I keep finding more fun stuff to do on the ancients, and can't bring myself to move on! How do you do it?

Looks soooo yummy!! My favorite part of history!! We're in for an ancient Chinese feast soon!!!

I get through it by telling myself that we'll study it again and more in depth in a few years, so......... yeah. And we do a lot of 'extracurricular' reading and movie-watching.