I love Halloween. I think I've mentioned that. I love the traditions, the history, the everything. Usually the kids and I do a bunch of stuff for the holiday. We carve pumpkins, make cookies, read stories, visit a pumpkin patch... the whole nine yards.

This year? Not so much.

We were supposed to go to a pumpkin patch with my homeschool group, but the kids went to spend the night at Grandma's instead. We had plans the following weekend, and then last weekend... well, it was the weekend before Halloween, and have I mentioned that I hate crowds? I especially hate crowds when there is a one-lane dirt driveway involved and it's rained recently. I have a great tendency to get stuck. So pumpkins haven't happened this year. We did decorate Halloween cookies, which was fantastic till the kids started sneaking them for breakfast and lying about it, and then the cookies had to disappear into the realm of the garbage because my kids are like heroin addicts - once they get a taste of something forbidden, they come back to it again and again. At one time I could have put them on the top of the fridge for safekeeping, but that no longer works... M1 can reach up there. And with no impulse control whatsoever, I can't just tell them 'no.' That's an invitation to see what they can get away with.

It's also why M1's Nintendo DS that he got for his birthday is living in my room already... finding him at midnight with circles under his eyes down to his knees while muttering, "One more level... one more level..." doesn't do good things for anyone.

So we haven't done a lot for Halloween. I'd apologize, but I'm not terribly sorry. The kids haven't been asking about these things, so I suppose that means they're not terribly missed.

Plus, I have friends who will take all the entertainment responsibility off of my hands. 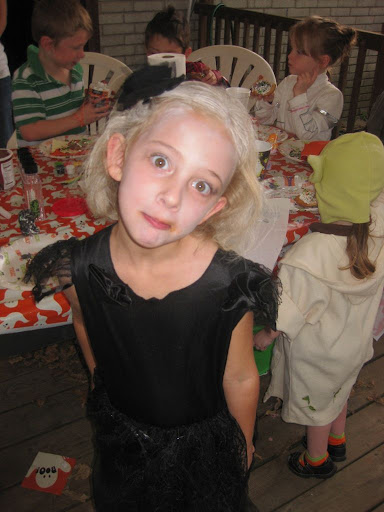 This was our hostess last weekend at my friend Sonia's house. Isn't she a perfect little dead girl?? She's M1's age and just as adorable as can be. 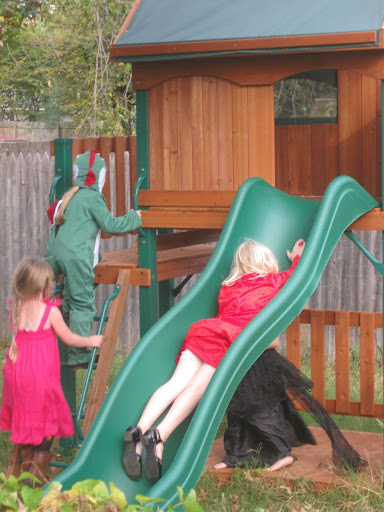 She also has a playhouse that is the envy of the entire neighborhood. M2 clearly loved it, and I was grateful that I'd made her wear shorts underneath her costume. 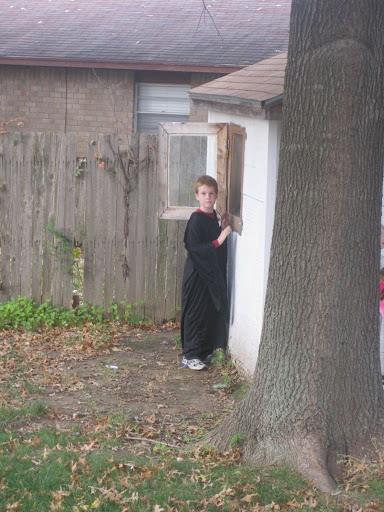 I sneaked this shot of M1 when he was least expecting it. He's developed a sudden aversion to cameras. I'm going to have to work on this. He's supposed to be Death, but Death had already lost his mask and scythe somewhere in the yard. I have no idea how he manages to keep track of his head. I think next year I'll have him be the Headless Horseman just so he can misplace his head.

It would amuse me. 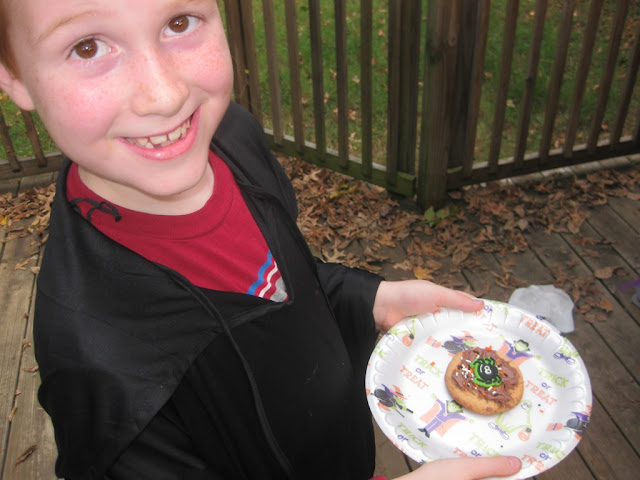 The kids decorated cookies during the party. Most of the kids also painted small ceramic figurines, but my kids didn't want to do that (which isn't surprising for M1 but is for M2), so they didn't. Cookies were a bigger draw. Sonia had all sorts of sprinkles and goodies available to put on the cookies. 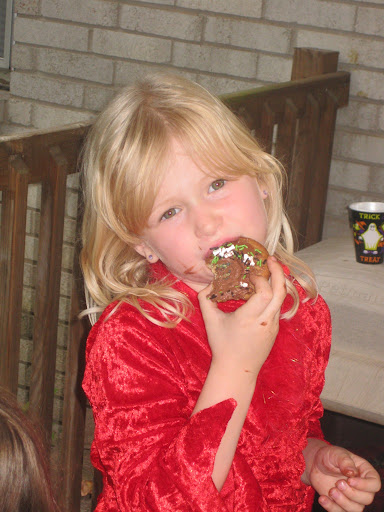 M2 couldn't wait to bite into hers. Little Devil. She's really looking forward to this weekend when we go to my friend Christy's house to trick-or-treat.

Came across your blog and liked the pictures.

Love the pics of them with their cookies! They are too cute! And, yummy!

Looks like you had a lot of fun. AND your house isn't wrecked! Yayyy!!

Mom on the Verge, I didn't have to even clean at all! My house *is* a wreck, but it's got nothing to do with a party. I'm just nice and unmotivated (i.e. I have no planned company) this week :)