Of Copters and Classes

Friday was a busy day up at M2's school. First of all, it was their dress-up day, so when I woke up at 7:19 a.m. and realized that we needed to be out the door in 20 minutes or less WITH costumes and breakfast and bathroom stuff all done, I completely panicked. Thankfully my kids are finally old enough to understand the word ***NOW*** when I really mean it, so we made it. I dropped M2 off, ran back home, started laundry, gave M1 his math test and short writing assignment and review spelling lesson, and then we headed back to the school with him studying French and Latin flashcards on my phone on the way. Yay for a short school day!

Shortly after we arrived at the school, all the classes came outside and lined up beside the field. We waited.

We heard the sound before we saw it. 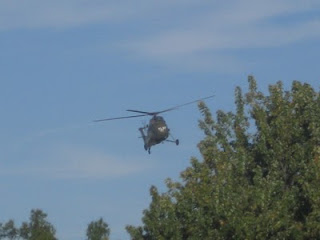 It rounded around the field and circled back. I loved watching the trees flap in the wind created by the rotors. 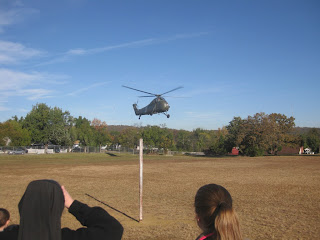 It wasn't nearly as noisy as I had expected. 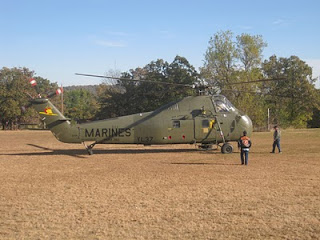 Meet the YL-37, a Vietnam-era helicopter restored to its former glory. What a treat! 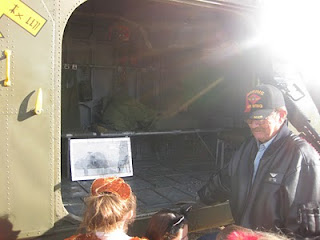 The kids were all well-informed about the copter, but they still all had questions. M1 wanted to know how much cargo it could carry (5000 pounds), and the kids had questions about all the specific equipment ("What's that yellow thing up there?" "That's a winch for lifting people or cargo out of dangerous areas."). Each class went up separately, and the guys running the show were amazingly patient and tailored their answers to the age and knowledge of each class. They didn't talk about dead people in front of the kindergarteners, for example. 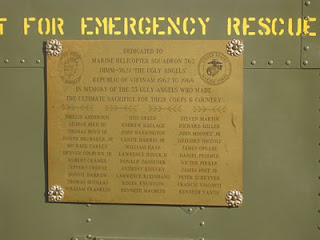 They could have, though. There's a long list of men from their squadron who didn't make it back to American soil. 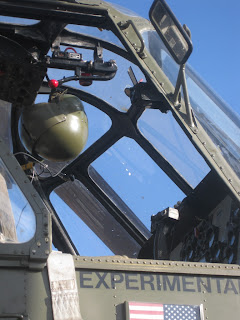 The men who flew in this cockpit saw their fair share of combat, too. 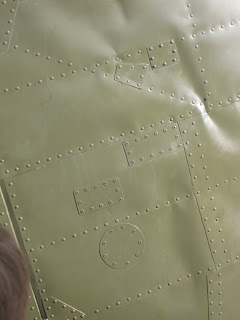 See the riveted patches? Those are where the bullet holes riddled the copter. That just blew my mind. There are FIFTY-FOUR of those patches. In one copter. Frightening. 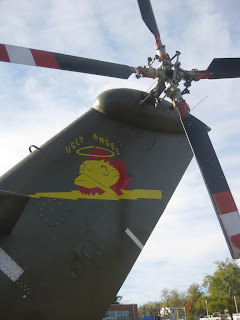 I've always been fascinated by the nicknames that air squadrons gave themselves. This one was "The Ugly Angel." My kiddo wanted to know where the cute angel was. I had no answer for that one. 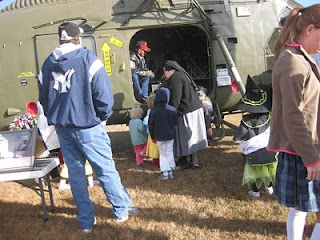 M2 took this photo. That's her teacher - the nun - up there with some of her classmates. 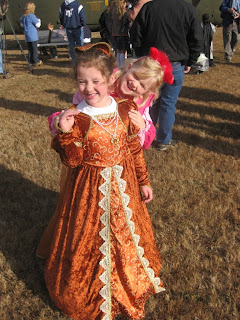 And here's M2 herself with another one of her classmates. Isn't that dress lovely?? 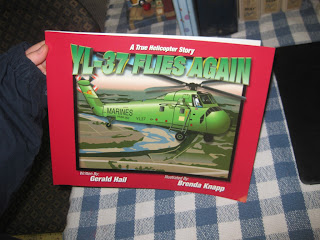 After M2's class went back inside and another class came out, I saw this book sitting on the table next to the school office. M1 picked it up for a quick read. It's a wonderfully done book, written in first-person perspective from the helicopter's point of view. It's informative enough for a bookworm like M1 but delicate enough that M2 also enjoyed it when it was read to her class a few days ago to prepare them for the helicopter's arrival. 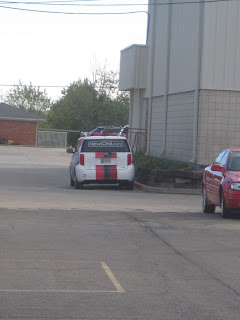 In addition to the students, of course, the local media showed up to shoot their own story of the day. You can read their online story here. If you click on the slide show, I'm actually in the last photo... at least, the back of me is. I'm the blonde person with my purse strapped diagonally over my torso. They did a video segment as well, for the evening news, and M2 made it into that, but it's not online. Oz recorded it for her, though, and she loved seeing herself and one of her friends on TV.

It was a truly neat experience. Now I just need to work out when it's going to be somewhere that I can score a ride...